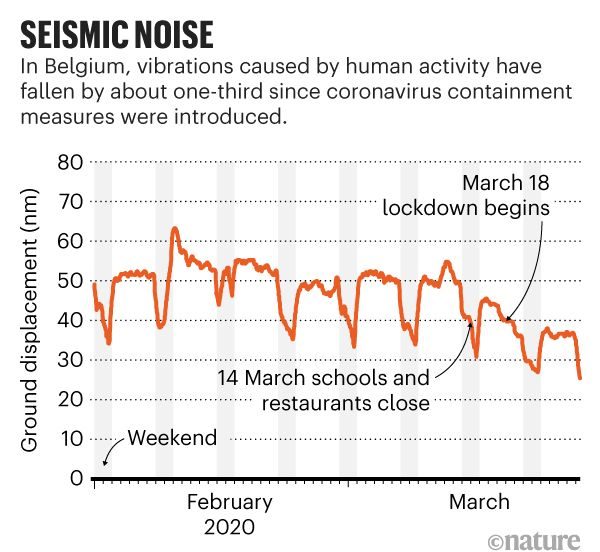 Researchers reported that a reduction in seismic noise has occurred with measures taken against coronavirus worldwide. With this decrease, it is said that the locations of small earthquakes can be predicted more efficiently.

The coronavirus epidemic, which has recently influenced the whole world, has brought chaos to the economies of many countries. On the other hand, countries’ efforts to prevent the spread of the virus have caused the planet itself to move slightly less. Researchers investigating the movement of the world reported a decrease in seismic noise as a result of the cessation of transportation networks and other human activities worldwide.

Researchers say that this drop in the humming of the planet’s crust will help the detectors to detect smaller earthquakes and track volcanic activity and other seismic events. Thomas Lecocq, who served as a seismologist at the Royal Belgian Observatory, notes that a noise drop of this magnitude usually occurs only briefly during the Christmas period.

Human-induced effects make it difficult to detect other signals:
While natural events such as earthquakes cause the Earth’s crust to move, vibrations caused by moving vehicles and industrial machines can have a similar effect. At this point, the effects from individual sources produce small background noise, making it difficult for seismologists to perceive other signals occurring at the same frequency.

Data collected from a seismograph at the observatory show that the measures taken to prevent the spread of COVID-19 in Brussels reduce human-induced seismic noise by a third. Among the measures taken in Brussels are the closure of schools, restaurants and other public places from 14 March; As of March 18, all non-compulsory travels are banned.

The changes were not only noticed in Brussels:
Andy Frassetto, another seismologist living in Washington DC, says that if quarantines continue in the coming months, detectors around the world may be better than usual to locate aftershocks. Moreover, it is not only Belgian seismologists who realize the effects of the quarantine. At this point, Celeste Labedz from the California Institute of Technology stated in a tweet that a similar decline occurred at a station in Los Angeles.

On the other hand, geologist Emily Wolin says that not all seismic monitoring stations can record significant effects as observed in Brussels. The reason for this is that many stations are located in remote areas to avoid human noise. At this point, it is stated that there will be no smaller or no change in the noise levels recorded by such stations.

A New Microscope Has Been Developed That Can Capture Brain Signals