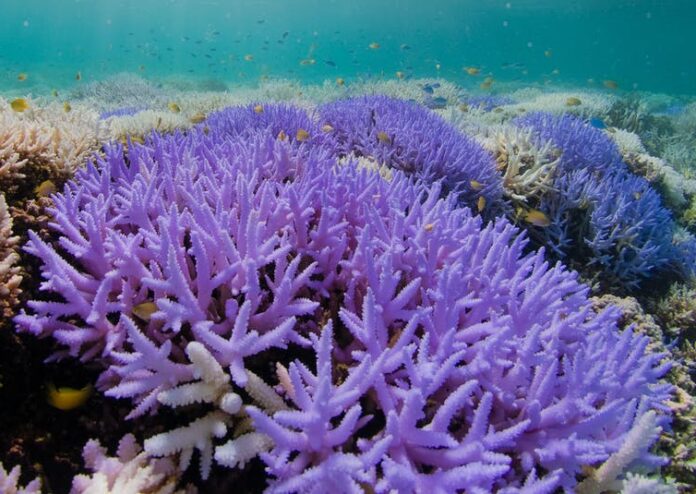 When subjected to pollution or too hot water, the coral undergoes a bleaching which often results in its death. But it has one last defense: produce fluorescent pigments which act like a “sunscreen” to protect it from light and attract symbiotic algae.

When subjected to environmental stress , for example when the water becomes hotter or more acidic , corals undergo a fatal bleaching . A phenomenon linked to the disappearance of zooxanthellae , microscopic algae which live in symbiosis with coral polyps and which deprives them of pigments . Bleaching leads to the death of corals if it lasts too long. But corals have an ultimate weapon to defend themselves: to produce a kind of “sunscreen” which gives them a fluorescent appearance.

“These bursts of color correspond to a desperate effort by the coral to attract microalgae again,” describes Jörg Wiedenmann, biologist at the University of Southampton and co-author of a study on this phenomenon published in the journal Current Biology . The production of pigment is regulated by the intensity of light : when the coral whitens and the internal light becomes too strong, the coral cells stimulate the production of colored photoprotective pigments. This then creates favorable conditions for the return of zooxanthellae.

Such “colored bleaching” occurred in some areas of the Great Barrier Reef during the lastmassive bleaching in March-April 2020 . This gives hope for a recovery of these areas that we thought were doomed.

An Amateur Astronaut Dies as a Result of Driving a Homemade...