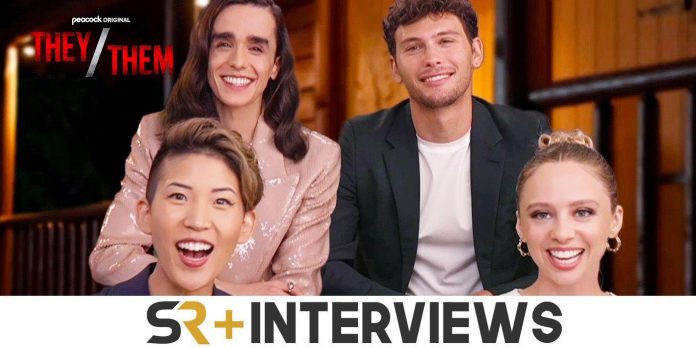 Cooper Koch, Darwin Del Fabro, Monique Kim and Anna Lohr star in the new horror slasher “They/They are “about the series “Peacock”. The film tells about a group of queer youth who are sent by their parents to a conversion therapy camp. In the film, real-life horrors are combined with horrific murders when people in the camp begin to die mysteriously. Theo Jermaine, Austin Root, Carrie Preston, Kevin Bacon and Anna Klamsky also play the main roles.

They/They are written and directed by John Logan, the screenwriter of such popular films as “Skyfall”, “Ghost” and “Alien: Covenant”. “They/They”follow in the footsteps of cult slasher films such as Friday the 13th (which also starred Bacon), but updates the format for a new generation, bringing queer to the forefront in an innovative way.

Related: 10 Best Movies Similar to Them / Their

Screen Rant talked to Del Fabro, Ent, Kim and Koh about the film’s many twists, the chemistry between the characters on set and much more.

Screen Rant: Darwin, the twist with your character has added an interesting layer to the film. I didn’t expect this. What was your reaction when you found out that your role would change in this way?

Darwin Del Fabro: I think that such a range of emotions in this film for an actor is everything you can wish for. And just being a part of a John Logan movie. I was invited to this role; he wrote [it] for me. It’s just a chance to play something unique with the freedom to explore more than one thing, and I love such challenges as an actor.

Cooper, as a result of this, Stu had one of the most difficult scenes to watch. Can you go through what it was like in a movie?

Cooper Koch: Well, I’ve been sitting in a chair for a long time. No, it was great. There were wonderful actors around me that I could work with. That guy, what’s his name?

Monique Kim: I think it starts with a “K”.

Cooper Koch: Kevin? Kevin. Something like that [laughs]. It was great. And this guy connected wires to me, tortured me and was so creepy. It was very easy to get into this space.

Kim and Veronica’s relationship was the sweetest, I was rooting for you all the time. How did you establish such mutual understanding on the set?

Anna Lor: Well, I’m not speaking for both of us, but I think Monique and I were so lucky that we understood each other right away. We didn’t have a lot of work that we had to do to build a relationship. We both understood our own characters so well and what the other person’s character means to our character, that as soon as…

When you’re rehearsing your own script, you’re reading it alone in your hotel room or somewhere else, and you’re kind of just lost, and then you bring it in and suddenly, as if Monique appears in front of me in the image of Kim yi, for an actor it’s the best feeling in the world. When you’re like, “Oh, my gosh, that’s all the work we’ve done together.” And when I see it on film, I think it looks so beautiful. I’m so happy with this. And I was so lucky that Monique was my partner.

Monique Kim: And I trusted her right away. And let’s be honest, she did all the hard work. I just had to react to what she gave me. I had the easiest job in the world.

You had great hair!

Monique Kim: And the hair did all the work for me! I just needed to breathe and react to what she was giving me. She made my job so much easier.

A group of teenagers at an LGBTQ+ conversion camp are subjected to disturbing psychological methods while being chased by a mysterious masked killer.

Check out our other interviews with the stars of “They/They are” by Kevin Bacon and Carrie Preston and Theo Germain, Austin Root and Scott Turner Schofield, as well as with writer and director John Logan.