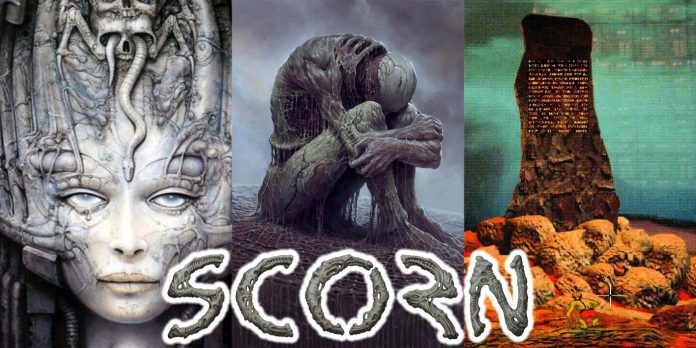 Swiss surrealist H.R. Giger has had a massive impact on the realms of science fiction and horror. Best known for sculpting the monstrous Xenomorph seen in the Alien movie franchise, Giger’s weird works have gone on to inspire plenty of other artists, and a veritable celebration of his artwork is on display in the upcoming horror FPS title Scorn.

However, Scorn isn’t the only video game to bear Giger’s unique style; from mind-melting mid-90s point-and-click adventure titles to modern-day horror masterpieces, these are games that fans of H.R. Giger cannot miss out on.

Giger was famed for his ability to blend horror and eroticism, and that’s perfectly recaptured in the 2021 indie title Lust From Beyond. The game takes place partially in a manor occupied by cultists who worship a warped deity of lust. Other portions of the game are set in the otherworld of Lusst’ghaa, a realm of extreme depravity almost akin to the home dimension of the Cenobites from Hellraiser.

While the art direction is Giger-esque through and through, Lust From Beyond also borrows narrative elements from famed horror writer H.P. Lovecraft, weaving a narrative of madness brought on by close contact with beings far beyond the realms of human understanding.

Konami’s Contra set an early standard for run-and-gun video games; released in arcades in 1987, it would receive a subsequent NES port that would go down as one of the very best 8-bit games of all time.

While its art direction is frequently overshadowed by its exemplary gameplay, Contra borrowed quite a bit from the Alien franchise. The final level, in particular, is a contorted mishmash of brown, red, and purple fleshy amalgamates. Mouths protrude from walls, Alien-esque facehuggers crawl across ceilings, and there’s even a mid-level miniboss that looks almost exactly like a chestburster.

A throwback to the pixel hunt-centric point-and-click games of yesteryear, 2015’s Tormentum: Dark Sorrow sees players traverse a bleak world of Giger-inspired horror. Reminiscent of games like Dark Seed and Harvester—although much more straightfaced than the latter—Tormentum: Dark Sorrow and its relatively recent sequel are perfect for players who still mourne the loss of hardcore PC puzzle titles.

The extremely well-crafted, interminably bleak artwork serves as a major draw, but the many difficult puzzles may serve as a near-insurmountable barrier to progression for some. It really is an authentic throwback to the almost-never straightforward designs of older games in the genre.

Developed by Midway, the 1987 arcade title Xenophobe gained notoriety thanks to its unique multiplayer dynamic which saw up to three players work to clear starships of invading Xenos in an at the time rarely-seen split screen format.

While the slower-paced, almost claustrophobic shooter format was very different from the competition, Xenophobe’s main draw was its almost legally-dubious look that borrowed very heavily from the Alien franchise. Sporting what’s very blatantly a Xenomorph on the box art of the NES port and various Giger-esque creatures in-game, it’s a wonder that Midway didn’t get into any legal trouble as a result of this title.

Though it has since been overshadowed by the 2017 sequel that sported the same name, Prey released in 2006 and was heralded as a genre-defining FPS experience. The story of a young man who must draw from his Cherokee ancestry to thwart an invading alien force, it was a thrilling sci-fi adventure that drew on influences ranging from Event Horizon to Independence Day.

RELATED: 10 Fun Horror Games That Even Non-Horror Fans Can Enjoy

While the H.R. Giger influence isn’t quite as overt here, the flat, gray tones of the alien ship on which the game takes place mixed with the various biomechanical monstrosities encountered throughout its runtime are evocative of the bizarre, monochromatic hellscapes often depicted in Giger’s art.

Just about every major media franchise from the 1970s and 1980s received a pinball table conversion, and, although it only became available thirty-five years after the release of the first film, there’s an excellent machine based on the Alien franchise that’s the envy of all pinball collectors.

Fortunately, there are alternatives, an excellent option being the 1992 Sega Genesis title Dragon’s Fury. Despite the medieval-inspired name, it’s got Giger all over it. Every board looks to have been ripped from one of the artist’s worst nightmares, and it boasts a surprising level of challenge that’ll keep even pinball gurus on their toes.

I Have No Mouth And I Must Scream

In the far future, AM, an artificial intelligence that gained sentience, drives humanity to near extinction, keeping five human survivors alive to be continually tortured for the machine’s amusement. After overcoming five uniquely designed torments, a character of the player’s choosing is digitized and confronts AM directly.

RELATED: The 10 Best Horror Movies Of The ’90s, According To Letterboxd

An adaptation of a short science fiction tale by author Harlan Ellison, I Have No Mouth And I Must Scream doesn’t always reflect the specific stylings of H.R. Giger. However, Giger’s warped visions and perverse ethos emanate throughout the experience, and his unique brand of horror sci-fi definitely aided in the development of the game’s world.

That said, 2014 saw the release of what’s commonly held to be the best Alien game of all time in Alien: Isolation. A sequel to the 1979 Alien movie which follows the exploits of Ellen Ripley’s daughter Amanda, it bears an inextricable connection to H.R. Giger, who is a seminal figure for the Alien franchise.

Developed by Cyberdreams, the same studio that would later put out I Have No Mouth And I Must Scream, Dark Seed is a malignant, horror-centric point-and-click title that was made in collaboration with Giger himself. Dark Seed follows everyman Mike Dawson who is pulled into a world of chaos when an alien race implants an embryo in his head.

Featuring artwork made by H.R. Giger himself, this is an absolute must-play for fans of the artist’s macabre biomechanical musings. Unfortunately, it’s very easy for new players to accidentally softlock the game, meaning that only the very patient will be able to see Mike’s quest through to its end.

The obvious choice for fans of H.R. Giger’s works, Scorn looks to be a love letter to the late artist’s distorted surrealist style. Like something right out of an Alien movie or a Celtic Frost album cover, Giger’s aesthetic has perhaps never been as well realized as this.

Initially announced in 2014, it’s taken the better part of a decade for Scorn to come to fruition. Based on the screenshots and gameplay trailers alone, Scorn looks to be the horror highlight of 2022 alongside much-anticipated titles such as Atomic Heart and The Callisto Protocol.