Home Entertainment “Confidence is slipping away” — defeat by Arsenal is “hard to accept,—... 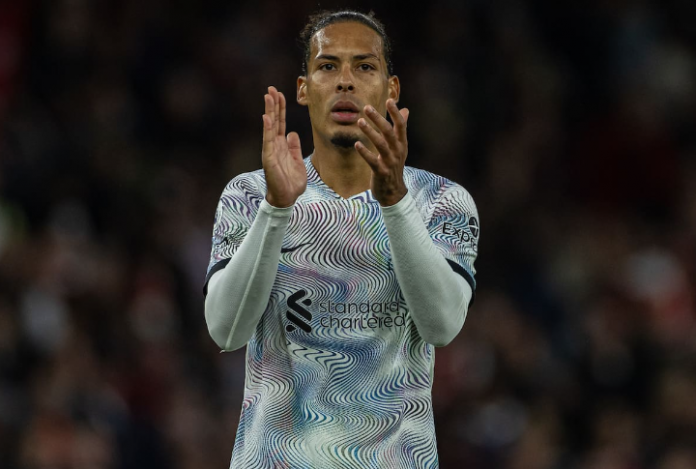 Virgil van Dijk admits that “Liverpool’s self-confidence is slipping away after the Reds suffered a 3-2 defeat to Premier League leader Arsenal on Sunday.

The Reds came from behind twice to equalize the game before Bukayo Saka scored the winning penalty 15 minutes from the end.

As a result, Liverpool are 14 points behind Arsenal in the Premier League, having won only two of eight matches this season.

Van Dijk admits that the way Jurgen Klopp’s team lost the game was “hard” and does not believe Arsenal’s penalty should have been awarded after Thiago was found guilty of bringing down Thiago in the penalty area.

“Of course, it was a very difficult game for both sides. We had good moments, we had bad moments.

“Then everything was decided by a penalty, which, from my point of view, was not a penalty. But it’s happening so fast, I wasn’t watching in slow motion. Unfortunately, we couldn’t score enough points to get back to Liverpool.

“It is difficult to perceive conceded goals at all. But we know that they are in the best moment of their lives right now. They had a great season. We knew it would always be hard.

“I think we had good moments, at times we created good moments. In my opinion, it’s hard to lose him because of a penalty, but it is, so we have to deal with it.”

Van Dijk is widely regarded as the best defender in the Premier League since his arrival from Southampton for 75 million pounds in 2018, but he is currently part of a quartet of defenders who concede too many goals.

The Dutchman admits Liverpool’s confidence has suffered a lot and says the players will have to work hard to regain the incredible form they have shown under Klopp in recent years.

“Confidence certainly plays a role. We are all human beings.

“Sometimes at certain moments you need a little bit of confidence. If it’s not that high, it won’t help in certain situations.

“Every person needs confidence to work at the highest level. If you don’t win, confidence goes away.

“We know that we can change the situation, but we need to work hard. This is the only thing that needs to be done, and the only way forward.”

Next up for the Reds is a trip to Rangers in the Champions League, where it will be interesting to see if Van Dijk is given a rest before the meeting at Anfield with champions Man City next Sunday.

Supernatural: Castiel’s actor returns to The CW as a villain in...