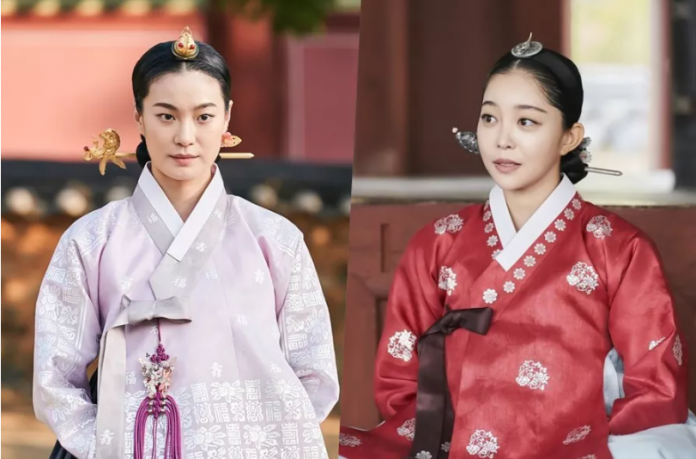 Ok Ja-yeon and Kim Ga-eun will lead a fierce battle at the royal court in the “Queen’s Umbrella”!

tvN’s upcoming historical drama “The Queen’s Umbrella” is dedicated to the Joseon Dynasty’s special palace education system. The drama will follow a conflict in the palace over an attempt to make real princes out of five troublesome princes who cause the royal family nothing but headaches. Kim Hye-soo will star in the drama as Queen Im Hwa-ryong, the wife of a great king and the long-suffering mother of five troubled sons.

Ok Ja-yeon plays concubine Gwi In-hwan, who comes from an incredibly prestigious family and background. After the formal selection process to become a royal concubine, Gwi In-hwan majestically rose in rank to maintain her place at the core of all palace concubines. She has a high level of dignity and elegance, which remains unchanged regardless of the situation and is highly respected among the ladies of the court.

Despite the fact that, it would seem, she has everything in life, the sore thumb in Gwi In Hwan’s life is her son, Prince Yi Seong (Chani from SF9). Despite the fact that Prince Yi Song is the firstborn of the king, he is simply called the son of a concubine born out of wedlock. After a lifetime of doing everything without getting her hands dirty or damaging her prestige, viewers are invited to focus on finding out if Gwi In-hwan will be able to maintain her elegance until the end when she meets Queen Im Hwa Ryong.

Chosen as the king’s mistress, former court lady Soen Tae(KimGaEun) rises along the way to become a famous concubine. She is full of cute antics and quick-witted, so it’s incredibly fun with her. Soen Tae also has an impressive ability to turn the smallest words and actions into his greatest charms. She boasts a cordial relationship with Queen Im Hwa Ryong, whom she obediently obeys, while the Queen considers Soen Tae cute.

However, Soen Tae changes dramatically when she realizes that the future of her bright and intelligent son, Prince Bo Gom (Kim Min Ki), may be jeopardized due to the origin of his birth. Even though Soen Tae’s transformation started from the bottom, it will also bring danger to Queen Im Hwa Ryong.

Gwi In-hwan and Soen Tae are just two of the many concubines whose goal is to put their children on the throne, which forces Im Hwa Ryong to take additional measures to protect their own sons. Stay tuned to find out how far the queen and these concubines will go to achieve their goals.

Thor: Love & The Thunder Runtime is Presented: The Shortest Marvel...

PS Plus will continue to have games launched on service