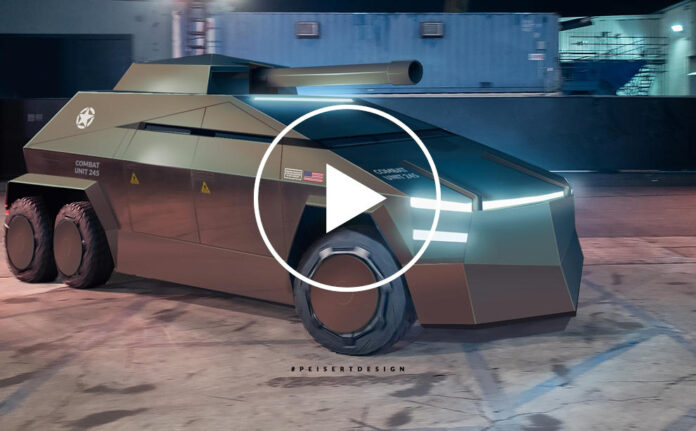 A concept designer turned Tesla Cybertruck into military combat vehicles. In the concept study, Cybertruck was transformed into heavy armored vehicles that can be used for various military missions.

Tesla Cybertruck made a tremendous impression with its unusual design and armored hull that caused controversy. According to Tesla, Cybertruck’s outer skeleton is made of Ultra Hard 30X Cold Rolled stainless steel, also used by SpaceX. Although we can not say the same for the glass that broke during the launch, it is a fact that the vehicle is quite solid.

Tesla Cybertruck was not designed to be used by security forces. However, the Dubai Police Service ordered the vehicle, and the Canadian police made posts that revealed that they wanted Cybertruck as a police vehicle. What if Tesla Cybertruck turned into a military tactical combat vehicle?

The concept that Tesla Cybertruck is an armored military vehicle
Render artist Jan Peisert was wondering what a heavily armored Tesla Cybertruck might look like, and worked with the YouTube channel Electric Future to create four different designs. He also met with vehicle armor manufacturers, military experts and automotive designers to present their designs in a realistic way.

The designer also imagined Cybertruck as a 12-person military transport vehicle, replacing the Humvee with an additional six-seat cabin, a ceiling-mounted machine gun, and even a deployable drone. He went even further, turning Cybertruck into a military tank containing heavy armor and a 360-degree tank weapon. The undercarriage shield was placed in the faraday cage to protect the electronic components from electromagnetic explosions while protecting the vehicle from mines.

Finally, the camouflaged “Silent Scout” configuration makes Tesla Cybertruck a great tool for exploration missions. These concepts show that Tesla Cybertruck can be quite effective on the battlefield.

Samsung to increase the number of countries sold to Galaxy Fold...

BTS REMEMBER ITS BEST MOMENTS OF 2019 WITH THESE PHOTOS