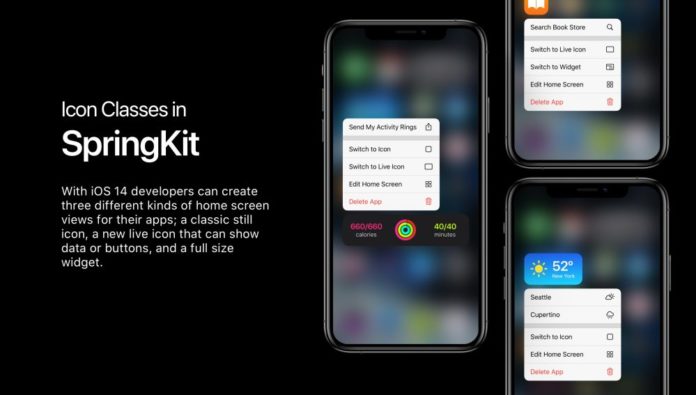 While talking about Apple’s bringing a new Widget feature with iOS 14, a designer created a concept for new Widgets. According to this concept, users will be able to actively use 3 different Widget views.

US-based technology giant Apple continues to work on the upcoming new mobile operating system. The company will introduce the new version of the mobile operating system, called “iOS 14”, to iPhone users in the coming months. Consumers will most likely start actively using this version at the end of September.

The claims made recently have revealed that Apple will give iPhones for iOS 14 a renewed “Widget” feature. If the claims are true, iPhone users will have the opportunity to experience these new Widgets with iOS 14. Now there has been a new development on this issue. A designer dreamed of how the Widgets, which are said to be found on iOS 14, might look like and created a concept.

This is how iOS 14’s widgets can look
The designer’s dream is that iOS 14 will have 3 different Widgets. Accordingly, consumers will be able to choose a classic still icon, live icon showing data or buttons, or a full-size widget. These different Widgets will offer different possibilities for consumers. In this context, we can say that especially those other than the still and classical symbol can be liked by consumers.

According to the concept created, the weather app on iPhones can settle larger than a normal app icon. This settlement will allow the weather in the relevant location to be tracked without entering the application. The activity application, which controls the daily activities, can cover the screen completely from left to right.

iPhone users already have a Widget feature on the iOS 13 operating system. However, the current widget structure of iOS cannot offer users exactly what they want. Apparently, Apple is trying to make iOS more functional by developing a much better Widget feature for consumers. However, it is not currently possible to know exactly what Widgets are said to be renewed.

This is how AI boats are already transporting people

Cole Sprouse was arrested and explains himself what happened

It was discovered that the brain of birds was growing after...

87% of New York restaurants and bars are behind on rent

Realme’s Narzo Series Releases on May 11

Kylie Jenner shows off her freckles as part of her new...

Evolutionary Biologist Explains Why He Has Coronavirus In Many Celebrities And...