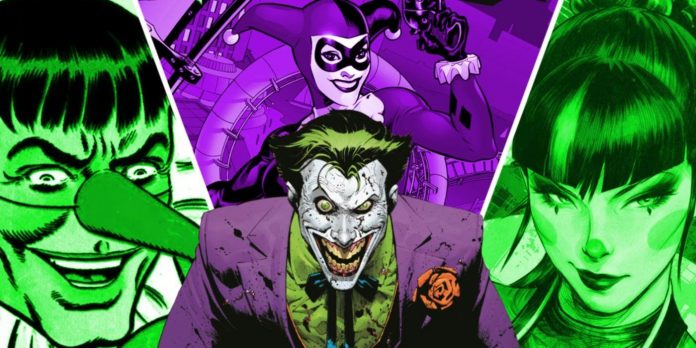 As one of the DC Universe’s oldest and most notable villains, the Joker has gone through a few wildly different characterizations. The DC Black Label miniseries Batman: Three Jokers attempted to comment on the rogue’s radical changes by breaking him down into three distinct people, each one representing a specific period of time in his history. But there was already a trio that better defined the Clown Prince of Crime’s dark trajectory: his sidekicks!

Few people know the Joker as intimately as those who have been by his side long enough to tell the tale. For all the changes Joker has undergone, the villain has had at least one person in his orbit that helped define the various stages of his life. Much like the trio of clowns in Batman: Three Jokers, his partners-in-crime show the grim evolution from costumed criminal to horrific supervillain.

Of all of the Joker’s sidekicks, Gagsworth A. Gagsworthy, aka Gaggy, is absolutely his most esoteric. Once a member of Haley’s Circus, Gaggy was replaced by the Flying Graysons, sending him down a dark path that ended with him meeting the Joker. After impressing the villain with his comedic stylings, Gaggy was made the Joker’s first sidekick. From there, the two began an extremely brief partnership with Gaggy serving as the Joker’s “court jester.” By his own accounts, these were happy times for Gaggy, because no matter what trouble the two got up to or how many times they faced defeat, things were always smiles and laughs for Joker and Gaggy.

Unfortunately, the laughs eventually stopped when Gaggy witnessed Joker murder a prisoner with a lunch tray. The two’s alliance ultimately came to a close when Joker was transferred to Arkham Asylum. Gaggy represents the most “innocent” stage of the Joker’s history. During the Silver Age of Comics, Joker was more of a clown-themed mischief maker than an actual threat. The Silver Age was a time of novelty, quirk and, thanks to the Comics Code Authority, relatively “safe” comics. The Joker was absolutely a menace in those years, but he wasn’t yet the darker, intense criminal he would become later. His brief time with Gaggy shows that in some of Joker’s earliest appearances, he was a relatively tame villain. At least, he was until that awful incident Gaggy witnessed in the prison’s cafeteria.

Surely, no comic book fan needs to be told the history of Joker and Harley Quinn. But for those unaware, during his incarceration at Arkham Asylum, psychologist Dr. Harleen Quinzel was charged with treating the Joker. But during her studies, she found herself enamored by the Joker’s words and eventually fell for him. Abandoning her life as a professional and donning a red and black jester outfit, she joined the Joker as Harley Quinn, his most notable partner. For years, Harley assisted Joker with a smile on her face and a mallet in her hand. She was in love with the Joker, but like Gaggy, she hadn’t yet seen his worst side.

Sadly, Joker and Harley Quinn’s relationship is not a pretty story. She may have been head over heels for Joker, but all she’d get in return was physical and psychological abuse. Harley’s time with the Joker is the perfect metaphor for his change in the Modern Age of Comics. It had been years since the Comics Code Authority had any sort of sway over the content of comics, and writers were free to explore darker parts of the Joker. He was more unpredictable, crueler, and indulged in the worst kinds of black comedy. Harley Quinn’s romance with her ‘Puddin’ represents a time in the Joker’s history where he took on a more violent nature. Gone were the days of innocent, clown-themed fun. At this point, the Joker was a monster who would hurt even those who showed him nothing but affection.

Thankfully, Harley was able to see the light and eventually broke it off with the Joker for good. But she’s not the only person in the DC Universe who has a thing for clown-themed villains. The Clown Prince of Crime’s newest assistant is the young, ambitious and positively deadly Punchline. A former college student with a proclivity in poison-making, Alexis Kaye became Punchline to impress Joker, attracted to the villain’s nihilistic MO. With Harley out of the picture for good, Joker took a gamble on the bright-eyed and eager villain-to-be. Joker took on Punchline as his new right-hand woman and her commitment to death and chaos has impressed him more than any of his other sidekicks.

Unlike Gaggy or Harley, Punchline appears to see Joker for who he is and embraces it fully. In return, the Joker seems to actually appreciate Alexis more than his previous companions. Though her debut is still within the definition of the Modern Age of Comics, Punchline’s obsession with Joker symbolizes yet another stage in the villain’s history. Punchline is attracted to the very worst parts of the Joker including his cruelty, his murders, and his desire for abject destruction. She proudly assisted Joker during the “Joker War” storyline because it was his greatest play against the Bat-Family and showed how serious a threat he actually was. Joker is long past being a clown-themed criminal or unpredictable maniac. He’s a full-fledged supervillain and Punchline is gladly along for the ride.

Like any other character that’s been around for close to a century, the Joker has developed over the years. Batman: Three Jokers tried rationalizing the villain’s development by splitting him up into three separate personas. Though this was done to make Joker’s wildly different eras make a bit more sense, the story added unnecessary confusion. It’s far easier to chart the Joker’s evolution through the people who have taken the risk of teaming up with the villain.

They may span entire decades, but these allies do the job of tracking Joker’s development highly effectively. From the mischievous misadventures with Gaggy to the deadly war games with Punchline, every one of Joker’s sidekicks marks a particular moment in his complex history.