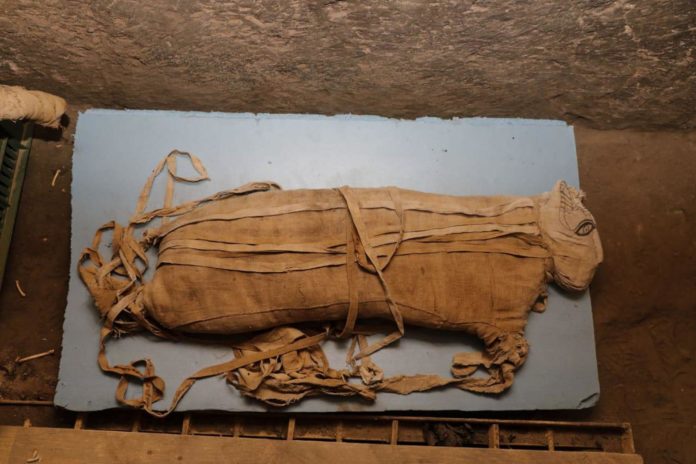 In Egypt, a tomb with dozens of cat statues and cat mummies was recently discovered. In the grave in the Saqqara region, besides the cat mummies, the lion mummies were found.

Embalming plays an important role in the religious belief of ancient Egypt. Embalming, which is the ritual of protecting the body for life after death, is not only done to humans. So far, many animals have been found mummies. However, for the first time a lion cub mummy was found intact.

The Egyptian Ministry of Antiquities announced at a press conference on Friday (November 23rd) that they found two mummified lion cubs, cat statues and cat mummies dating back 2600 years in a grave in Saqqara.

Mostafa Waziri, the Secretary General of the Egyptian Antiquities Council and the director of the expedition team, said in a speech at a press conference, “With this discovery, the first of all the mummy of a lion or lion cub has been found.”

The analysis of the mummies in the tomb continues. However, early studies show that lions are quite small. Waziri explained that the lions are less than 1 meter short and are not fully grown. Next to two lion cubs, three more mummies of large cats were found. These three mummy, leopard, cheetah may belong to such big cats. In the grave where the lion mummies were found, about 20 cat mummies were found.

In the grave where lions and cat mummies were found, about 100 statues were found, most of them depicting cats. Waziri said most of the well-painted and decorated sculptures were made of stone, wood and metals, some of which were covered with gold.

Egyptian Antiquities Minister Khaled El Anani said in a statement that there is also a small ebony statue of the goddess Neith. Neith was the goddess of Sais, the Egyptian capital during the 26th dynasty of Egypt (about 2600 years ago).

In the excavation area where cat mummies were found, a scarab-shaped statue larger than 30 centimeters was also found. The scarab, which was considered sacred in ancient Egypt, was a frequently used figure. The scarab was widely used in seals, amulets and jewelry. Archaeologists have explained that the scarab figure found may be the largest specimen ever found.

Saqqara, the area of ​​mummies, is a region where cats are concentrated. Cat mummies were also found during the excavations in the region. In 2004, a French research team found the remains of a lion skeleton. Antiquities Minister Anani added that the area was a memorial site for the ancient Egyptian cat goddess Bastet and his son, the lion god Miysis.

A ‘Binary Asteroid System’ Passing Near the Earth was Detected