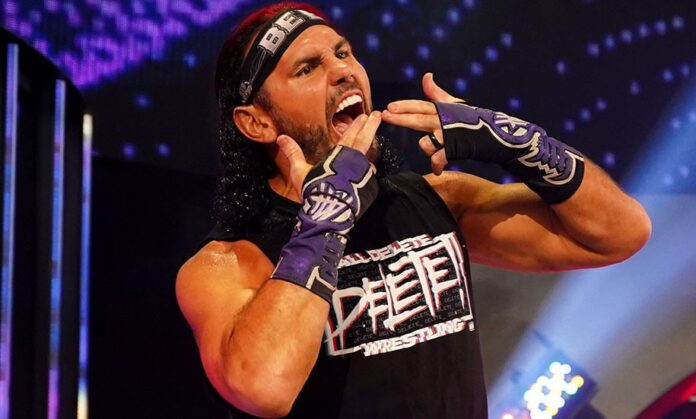 The match known as “Stadium Stampede” was held at the stellar event of Double or Nothing, where All Elite Wrestling unleashed the imagination of the components of the fight. One of the most comical moments occurred in the pool located on top of Jacksonville’s TIAA Bank Field, where Matt Hardy fought Santana and Ortiz, and transformed into several of their former characters.

For this, it is known that Matt Hardy needs the water and the members of Proud ‘n’ Powerful had to submerge it several times. This gesture was not well seen by the environment of Shad Gaspard, who recently died drowned in the sea after his son was rescued by the coastguards. Due to the controversy generated on social networks by this fact, some people around Matt have spoken.

“Matt has * MAGICALLY TRANSFORMED * in the water as part of a GIMMICK for over 5 YEARS. Shad was OUR FRIEND,” Reby Hardy wrote in response to a Twitter user who reminded him of what happened in the water after she He will indirectly criticize Jeff Hardy’s segment in the latest episode of Friday Night SmackDown. “We were heartbroken and shocked since it happened and you didn’t even know him. Stop that false outrage and screw you over. There was no ‘drowning angle.’ There was no drowning, period.”

Chris Jericho also came under criticism and talked about what happened on Saturday Night Special. “There was a big jolt from Santana and Ortiz, they tried to ‘drown’ Matt Hardy underwater as he changed his personality. Neither of us thought about Shad. I never thought about it even once,” Jericho said. “Looking back, there are a couple of things that were said that we shouldn’t have said,” Jericho admitted. “But about that specifically, Matt has been doing it for a long time. It’s not like we maliciously set out to do something disrespectful. And of course anyone who knows anything about me would know.”