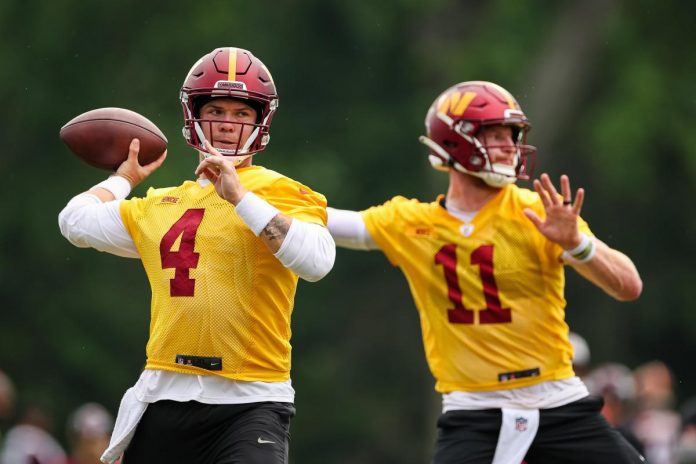 Despite several flashes of solid quarterback play over the past couple of seasons in Washington, backup Taylor Heinicke doesn’t think he has any chance of winning a spot in the Commanders’ starting lineup this offseason.

The Chiefs brought in veteran QB Carson Wentz in a trade with the Indianapolis Colts earlier this year. It is planned that the new QB1 will earn $28.29 million in the 2022 season.

Heinicke is preparing for the final season of his two-year, $4.75 million contract with Washington.

The undrafted quarterback cited this contract mismatch as the main reason he will never be able to win a spot in the starting lineup this offseason.

“I don’t think that’s an option,” Heinicke said at a news conference on Wednesday. “You look at the NFL, and at the end of the day, it’s kind of a business. If you pay someone $30 million and someone else $2 million, you pay this guy $30 million for the game, you know?”

“Carson is a great quarterback, and you see that during OTA and mini-camp. And I hope he goes there and succeeds,” he added. “And again, my job is just to support him. I hope he’s in business, I’ll help him in any way I can, and if for some reason he loses, I’m ready to go play. That’s how I look at it. But, again, the NFL is a business. You pay a guy a lot of money, you pay him money for some reason. He’s going to play.”

The Washington organization was firm in its belief in Wentz as the team’s starting quarterback.

At the same time, Heinicke proved that he has everything he needs to take a step forward if option #1 fails.