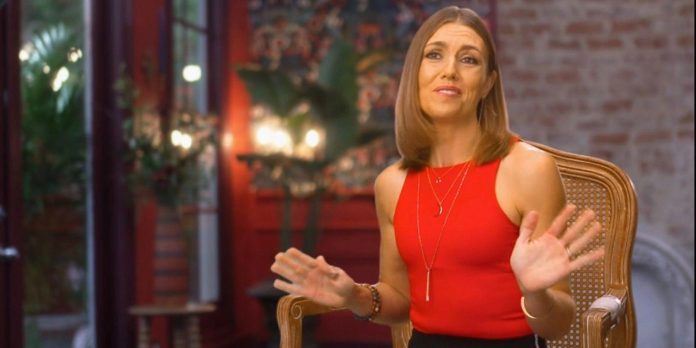 “Coming home in the real world: New Orleans” ended with an eight-episode screening on Paramount+, which attracted the attention of Critics Choice Real TV Awards, and Julie Stoffer joined Beth Stolarczyk live on Instagram before the ceremony. On June 12, Julie revealed the behind-the-scenes details of the show. The Real World: New Orleans premiered on MTV in 2000 and featured seven strangers living in an iconic Belfort mansion.

In the biography of Julie on MTV, she is described as an inquisitive person, brave, passionate and ready to become a leader. She would later appear in five seasons of The Challenge, winning her first season in Extreme Challenge and reaching the finals during her last appearance in Glove 2. Rope” in The Inferno. This was the time when it was allowed to open containers in trials.

In the 6th episode of the 3rd season of “Spiritual Bypass”, Julie told her roommates: “…Because now I publicly condemn Mormonism, and this is a sin. Is it more serious than murder? are they talking? It’s a sin. It’s not a sin, it’s a sin. I’ve never said I’m not a Mormon because of the seriousness of it.” One of the reasons she left the church was because “these religions create an unsafe world for someone like Danny.” Danny Roberts openly identifies as LGBTQ+ and reluctantly became the unofficial face of the repealed “Don’t Ask, Don’t Tell” law, which would disgracefully dismiss those who serve in the army for belonging to LGBTQ+.

During the season After returning home, Julie’s dramatic behavior looked fabricated and over-produced, which made the other roommates feel insecure around her. Melissa Beck was confronted from the very beginning with Julie’s past actions, which negatively affected her and Danny on tour with performances in the early eighties, when Julie’s agent sent letters to organizations that discredited them. Danny recently confirmed on the Hot Takes program & Deep Dives with Jess Rothschild that Julie’s agent was her mom. The season ended with Kelly Wolf leaving the show early because she felt exhausted. However, in a recent Instagram post, she said she left because she didn’t feel safe around Julie. The entire cast was invited to the 4th annual Critics Choice Real TV Awards. However, it’s unlikely that Julie will be around her former roommates, after what she said live to Beth on Instagram while getting ready for the event.

Julie knew she was going to be a villain

In a 51-minute Instagram live stream, the famous Challenge graduate Beth applies her Eyelusion Lashes to Julie, admiring her newfound fascination with social media. At about the 14th minute, Julie puts on eyelashes in the style of “Cat’s Eye” and says to the camera: “Why didn’t I wear them to Homecoming? OK, let me tell you a secret. All the girls on my show “Homecoming” I had these things. And they became like people who came to do it, and botox, and all that. And I was like an ugly girl in the corner, I just don’t have needles or anything suitable. eyelashes or something like that. And I totally regret it now. Because look how great they look.”

Reality TV star Julie from The Challenge also spoke about her wardrobe for the promo photo: “They said I can’t wear black. They vetoed all the things I had. this outfit. First of all, it was very tight. And I knew why they chose that color. Because they’ve already told me I’m going to be a villain.” The outfit in question may be a tight red T-shirt, which can be seen in many confessions.

Towards the end of the video, John Brennan joined Beth’s Instagram live stream from Panama City Beach. Before joining, Julie remembered that John had urged her to participate in social networks: “Because I’ve already done Homecoming. And he’s like this:” Why aren’t you on social media? I’m like, “Because I don’t want to do it.” And then he made me join him.” Fans of the “Real World” can thank John for adding more content to the world of Julie, a former graduate of the “Challenge”, or make a remark to him.

When Julie described “Homecoming: Los Angeles” as a drama, John sarcastically retorted: “Wait. Wait. Wait. Julie from New Orleans said we have a lot of drama?” Julie’s response: “Listen! I was the only one who had drama in my season… I was fucking carrying this shit. Not cool. As if I understood the task.