Home Entertainment Comey Can’t Communicate Season 2: Where did It All Go Wrong? 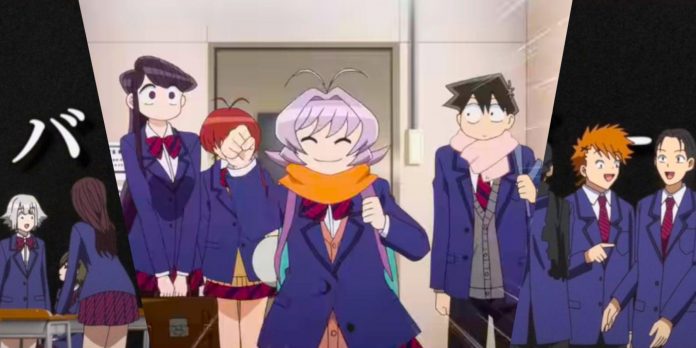 If the entertaining storyline of Komi Can’t Communicate doesn’t keep fans glued to their screens, then the intricate and stunning artwork certainly will! Not only is Komi a Goddess in her own right, but the beauty of the Japanese culture is celebrated throughout the show, with elegant fanservice and architectural accuracy regularly included to dazzle the senses. The only major complaint to come from Komi Can’t Communicate fans is the lame name puns (put the translator away!), that is until Season 2 rolled around, and viewers began to question the artistic integrity of their beloved anime. Poor drawing and choppy, lazy animation has completely ruined the aesthetic that fans have begun to anticipate from the show.

It is not absurd to have higher expectations of the studio that brought the Pokemon movies (and more) to life, however, many fans believe that OLM Studio has dropped the ball recently. As the company artistically responsible for Komi Can’t Communicate’s production, they are some of the first to receive praise when this slice-of-life became an instant hit in 2021, but in the same breath, OLM is surely to blame for the lackluster and inconsistent quality of animation in some episodes in Season 2. Komi’s fans have acquired a rich taste in beautiful imagery for themselves after loyally following her story, and anything less simply will not do.

Where Is The Love?

As invested as fans are in Komi’s tale, many found it hard to watch when it came around to episodes 10 and 11 of Season 2 because it suddenly seems as if no passion was involved in creating these particular installments. Multiple, cringe-worthy drawings invade the picturesque setting of Itan Private High School, but several characters are severely disproportioned (even for Anime standards) and that essential attention to detail is mysteriously missing. To add insult to injury, the animation is also sub-par, with choppy movements and way too many three-frame loops to ignore (which are used pretty much anytime Najimi enters the scene.)

Komi Can’t Communicate is known for successfully using that signature blank expression to portray a particular emotion depending on the events, but this crutch is relied on all too heavily in Season 2 episodes 10 and 11, and for all the wrong reasons. True, Komi is almost always in a state of anxiety, but she doesn’t permanently come across that way, which is essentially the whole point of the show. Komi is the most popular girl in school and the official Class Goddess, but her dazzling features (which are usually highlighted by a voyeur) are few and far between in these particular installments. Fans envisioned many more glam shots on Valentine’s Day, emphasizing her popularity and stunning good looks, but the minimal effort was applied instead.

Arguably one of the most disappointing aspects of this whole ordeal is the timing with regards to the storyline, as “It’s Just Valentine’s Day” is a vital moment in the progression of Komi and Tadano’s relationship. Even though Komi’s chocolate gift held firmly to their “friendship” label, it is the final push that both Tadano and Komi needed to finally begin acknowledging their feelings for one another. This romantic moment (coupled with the events of White Day in episode 12) should have been the highlight of the season, but it is the school trip to Kyoto that stole the show. Priorities people!

Both episodes 10 and 11 of Season 2 feel particularly disjointed, as there are elements of exceptionally stunning moments to be seen, where the usual high-quality artworks are put on full display (such as with Komi and Ren’s heart-to-heart in the bathrooms in “It’s Just Ripped Tights”). The little Looney Tunes-looking reels between chapters did nothing to improve the classiness and seemed quite random and misplaced, not to mention inconsistent. Overall, it feels that there are too many cooks in the kitchen, with multiple fingers in the pot, and now this five-star meal has unfortunately been contaminated.

Komi’s anxiety is transferred onto her fans as they begin to wonder if their favorite slice-of-life is doomed; destined for more poor-quality content in the future. Komi Can’t Communicate’s fate lies in the hand of OLM Studio, who have done a magnificent job so far with the help of Asami Hayakawa, Akane Hirota, and Akane Ogawa, but unfortunately, these amazing artists are not exclusively focused on Komi’s story. Summer Time Rendering allegedly deserves more attention than Komi Can’t Communicate at this stage in the game. It seems that OLM Studio may have bitten off more than it can chew, as they have had to rely on outsourcing to get the job done.

It may surprise some to know that this is not the first time that OLM Studio has resorted to outsourcing for the show, having only produced 4 of the 12 episodes in Season 1 themselves.

The exact people responsible for disappointing fans in Season 2 episodes 10 and 11 are unclear, however, it appears that the regular team is back on the job for the big White Day finale to end things off on a sweeter note. If this sub-standard animation becomes a standard feature in Komi Can’t Communicate, this once-popular anime will undoubtedly lose vital viewership, and subsequently, be pulled from the air. OLM Studio’s timing could not have been worse, providing poor quality content near the end of the series. Angering their audience just before questions of renewal for Season 3 are being asked is not the best course of action, but hopefully, these few episodes won’t topple the fan base too significantly.

Roseanne: Why the original DJ actor was remade