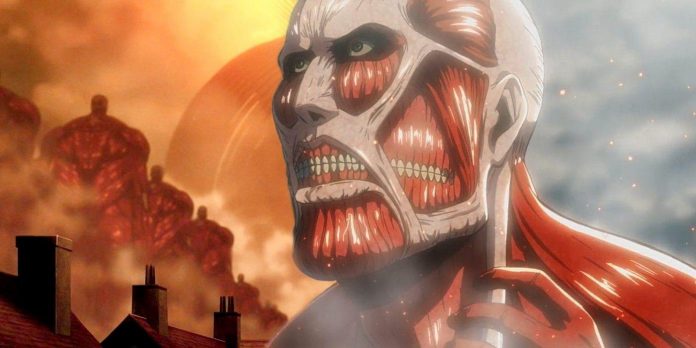 “Attack of the Titans” by Hajime Isayama is an innovative series combining the themes of war, humanity and revenge in a painful battle with huge creatures that devour people. Now an epic new piece of ukiyo-e fan art inspired by Japanese motifs conveys the full depth of the psychological experience of the battle with a Colossal Titan.

Attack on Titan takes place in a world where people live inside fortress cities to protect them from giant humanoid creatures called Titans who seek to devour humans. The series centers around Eren Yeager, a boy who lost his mother and home when a colossal Titan tore through the Maria Wall, the outer layer of the city. “Attack of the Titans” is essentially a revenge story, a fact that Eren clearly showed when he vowed to destroy the Titans and return peace to humanity. War in the AoT universe is a constant David and Goliath struggle, and this new fan art pays homage to Isayama’s complex fighting style, combining it with classic Japanese art of the Edo period.

On Twitter, the artist @Justin96636 posted a fragment of epic fan art, in which Eren Yeager fights with a Colossal Titan in a battle on the Wall. The colossal Titan on the right is very similar to Oni, and Eren is life-sized in a fighting stance on the left. Ukiyo-e’s cloud elements give the scene movement and action, while their faces are static, especially compared to the musculature of Titan’s anatomy and Eren’s scout uniform. This work is done in a vertical arrangement, which incredibly effectively conveys the size of a Titan compared to a human. The scene also stops at the moment of collision, a motif that is very characteristic of Isayama’s simple action sequences. A fan could easily imagine how this battle would develop, which is a hallmark of Isayama’s aerial-style senen fights. This art deliberately evokes emotions, conveying the terrifying power of Titans and the bravery of people.

One of the main themes of the “Attack of the Titans” franchise is the fragility of life. The artwork by @Justin96636 portrays this well in the overwhelming despair that Titans create in people’s hearts, especially in how inconsequential Eren seems compared to the likes of the Colossal Titan. Although this is a story about giant man-eating monsters, the main plot revolves around the motives and inner life of the characters. The series is a twisted experience with lots of really dark moments, but it’s also surprisingly human in its portrayal of what it takes to face incredible challenges over and over again.

“Attack of the Titans” is a series that is already known for its stunning battle scenes, and this fan art conveys these highlights with dignity, despite the fact that it uses a completely different style. War never changes in the “Attack of the Titans” universe—no matter who Eren fights—and this mythical art informs the inevitable struggle with forces more powerful than any individual.