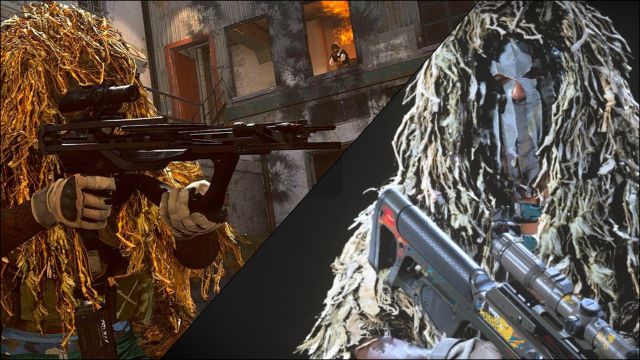 The Spirit of the Forest skin allows Call of Duty: Warzone players to become invisible from a certain distance. Tests.

Several users in the Call of Duty: Warzone community have found a new advantage among paid cosmetics. The legendary Spirit of the Forest skin, from the Grinch operator, allows its equipped to become invisible at a certain distance from other rivals.

The cosmetic is part of the Eloko package, which is sold in the ingame store at a price of 1800 COD points. Contents include two weapon projects (crossbow and MP7), a dialogue, a charm, a business card, and a spray. However, it is camouflage that allows players to disappear from the vision of others.

Scop3s_ on YouTube has shown the advantages of having it equipped between the following ranges:

Invisible from 34 meters without aiming.

Invisible from 55 meters when aiming.

Invisible from 125 meters when aiming with a x4 zoom sight, except the head and the weapon.

Naturally, the aesthetic elements should not affect the gameplay. In the past some weapon projects received performance improvements over their base model with the same accessories. In those cases the study acted sharply, via patch. Hopefully the same thing happens with the Spirit of the Forest.

It is not the only glitch that has transpired during this month of January. Beyond the stimulant fix, a set of players found another alternate way to access the Gulag without dying. This unintended advantage allows players to influence 1v1 duels from a distance. The method is performed from the game itself without any external software, so it is a bug that can be corrected by an update. Call of Duty: Warzone is available on PS4, Xbox One, and PC, as well as next-gen consoles via backward compatibility.

Tesla Cybertruck, Roadster and Gigafactory Are Now on PUBG