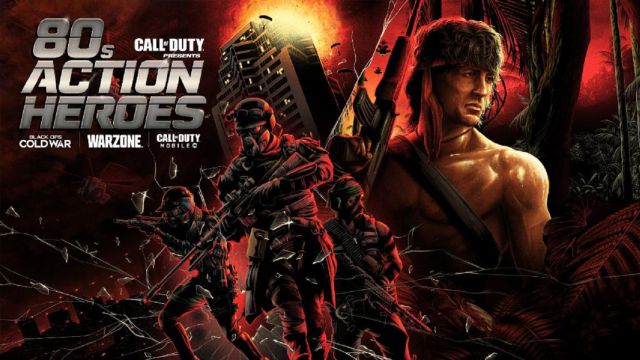 CoD Warzone: Activision announces the new event for Call of Duty: Warzone, Black Ops Cold War and Mobile: Action Heroes of the 80s. Rambo and Die Hard join forces. Call of Duty: Warzone announces its next event. Action Heroes of the 80s will star two of the most popular brands of the time. Rambo and Die Hard will join the battle royale as part of the expected content during Season 3. The ingame show will begin on May 20.

The contents do not take us by surprise. Recently we could see the first images of Rambo in the game, who wielded the characteristic bow of him. The character played by Sylvester Stallone will be joined by Die Hard (or Crystal Jungle, as it is known in Spain). Bruce Willis is expected to be the other face to appear in it.

The action begins May 20th. pic.twitter.com/8Rr3c7g26u

As we can see from its official poster, the event will dot the three main installments of the current Call of Duty ecosystem. Both Black Ops Cold War, Warzone and Mobile will cross universes with these mythical characters. No official information has emerged about what rewards and playlists await us from that day on.

The event points to that strip after Verdansk’s modification to the Cold War version of it. Last April, the nuclear event destroyed the map of Warzone that we all knew; now the combat is fought in full 1984, at the same time as Treyarch’s work.

Did you just land in Season 3? Don’t worry: click on this link to find out the best weapons you can use during this period. Modifications will ensure optimal performance in battle royale.

Forza Horizon 5: Details Of The Xbox One Version And Its...