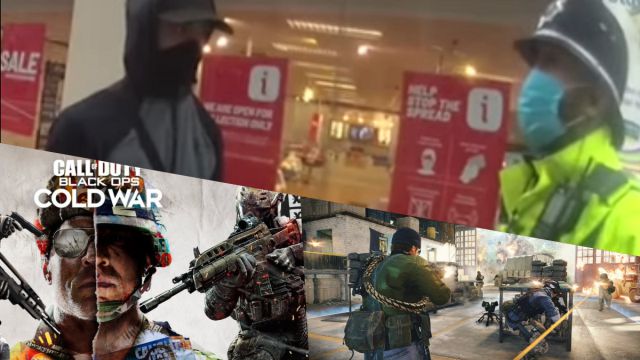 The escapee has been arrested in Birmingham, after British police asked him what he was doing on the street during the pandemic.

Clint Butler escaped from the British prison where he was being held on November 28. The convict was sentenced to 17 years in prison for the crimes of robbery and armed crimes, but he managed to flee and stay hidden from the authorities with relative success. His luck ended when he left home with a friend to acquire Call of Duty: Black Ops Cold War, the most recent installment of the popular Activision shooter, as shown in the video that you can see above these lines. The clip was posted on the West Midlands Police YouTube channel.

In the middle of the coronavirus pandemic and with the government’s restrictions fully in place, Butler was on one of the streets of Birmingham when the police stopped him to find out why he was not respecting the confinement. “I’ve come to buy the new Call of Duty because I can’t sit in confinement anymore,” he tried to explain.

One of the agents, then, tells him that they have been detained because they have seen how they tried to escape when they saw the police. Suddenly, Butler kicks the officer in front of him and tries to flee again, but the officer intercepts him on the ground.

The prisoner has since returned to his cell, although his sentence has been extended due to his most recent crime. That is, in addition to serving 17 years of the original sentence, he will have to spend an additional 13 months in prison. Superintendent Nick Rowe has said: “Why he decided to risk going back to prison by making the stupid decision to go into town to buy a game during lockdown will remain a mystery.”

It does not appear that Clint Butler is going to enjoy Call of Duty: Black Ops Cold War in his cell in the Spring Hills jail, located in Buckinghamshire. Those of us who are out can enjoy the game on PS4, PS5, Xbox One, Xbox Series X, Xbox Series S and PC.