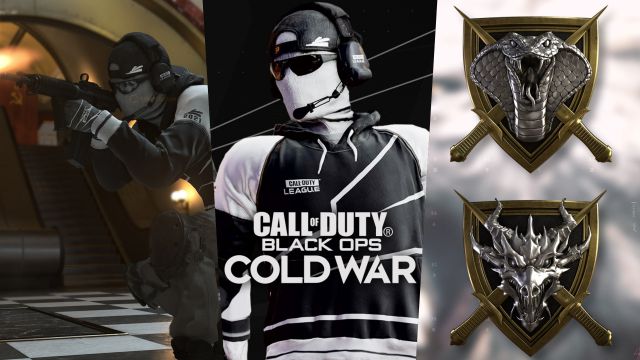 We tell you everything you need to know to play Call of Duty: Black Ops Cold War League Play on PS5, PS4, Xbox and PC. Compete with the best.

Call of Duty: Black Ops Cold War welcomes its ranked game mode. League Play arrives to fill the competitive slot of the 6vs6 multiplayer, which was dispensed with in the 2019 installment, Modern Warfare. Now, Treyarch enables the possibility of being able to measure yourself against players of the same skill range, beyond the casual games.

In this piece we will review everything you need to know. Ranks, divisions, rewards… everything, absolutely everything about League Play.

How can I play League Play?

League Play is available under the Multiplayer tab of the Call of Duty: Black Ops Cold War main menu. Being a separate mode, the armory will not save your custom classes that you have used so far. You will have to create your character from scratch, although you will see that you will have all the weapons and accessories unlocked from the beginning.

There are certain restrictions against multiplayer. Not all tactical equipment, lethal, perks and wild cards are present. For example, the Near Danger wild is not available, which allows you to carry two lethal and tactical gear at the same time. The stimulant doesn’t make an appearance either, and kill streaks will be reduced in number.

Basically you will play with the rules of the Call of Duty: League 2021. You will not be able to use light machine guns, tacric rifles, shotguns, launchers or special weapons. Available modes are Search and Destroy, Control, and Hot Spot, with modifications to the competitive rules.

Call of Duty Black Ops Cold War League Play: Ranks and Divisions
Please note that League Play events will occur twice a week. The first, between Monday and Friday, while the weekend will include from Friday to Monday. Your goal will be to ensure that you achieve the highest division possible in each event, making it easier for you to progress to the next and your next rank.

When you complete all five placement matches, you will be brought into a division based on your ability. As you win, you will achieve points in the ranking, in a classification that you will share with 50 other players of the same position. Winning consecutively will earn you a victory bonus, which you can combine with the daily game bonus.