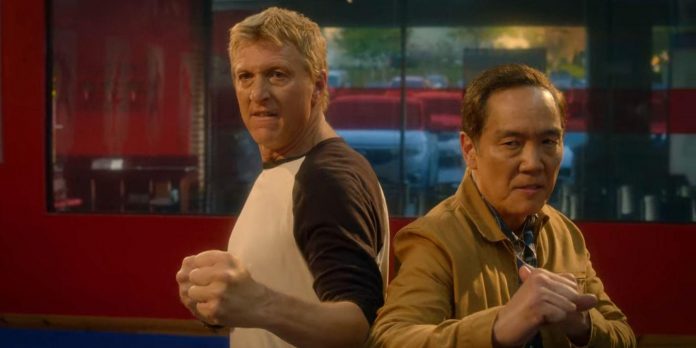 Despite everything, the fifth season of “Cobra Kai” increases the number of views to eleven in order to provide fans of the show with an improved version of everything they still liked in the spin-off “Karate Kid”. This is because the stakes in the Valley karate scene are higher than ever, as are the performances of most actors.

“Cobra Kai” has never taken itself too seriously, and in its fifth season, the series confirms its place as one of Netflix’s most insightful and engaging acquisitions, while showrunners Josh Heald and John Hurwitz prove why it took them longer to tell this story. Of course, this is not without problems, some plot points require too much time, but when everything is said and done, the fifth season will probably satisfy almost everyone who liked what they saw at the beginning, as well as everyone who still holds on. .

Keep in mind, however, that this time it is the adults who are fueling the karate drama, at least most of it, but it all looks like a somewhat normal response to the antagonistic display of power of Terry Silver, who is better described in the series almost as a James Bond villain. The play of Thomas Ian Griffith throughout all ten episodes is something that sometimes helps viewers immerse themselves in the utter absurdity of all this, because these are adults who are faced with a real psychopathic threat.

There are memes ridiculing how much of the Cobra Kai conspiracy would have been resolved if only Johnny Lawrence and Daniel LaRusso had undergone therapy, however, in this case it is clear that they (especially Daniel) become victims of Silver’s criminal machinations due to the fact that he constantly pushes them to the edge. This means that both men must be on top, which in this case means that Johnny eventually becomes a more responsible person, thus paying off all the character development that Cobra Kai very, very slowly created for the story arc of William Zabka.

In Daniel’s case, this means encountering some difficulties that he didn’t have to do too often in Cobra Kai, however, all this leads to the fact that he finally learned something from his former rival, besides the fact that their karate dojos fuel each other’s fighting styles. . Of course, his new friend Chozen also makes this possible, and Yuji Okumoto deserves all the credit in the world for making Chozen an incredibly likable hero, an eternal source of wisdom, and a constant comic relief to Cobra Kai.

Make no mistake, this does not mean that children do not grow up compared to themselves in the past, it’s just that this development seems more natural and less unexpected for the arches of the characters Miguel, Robbie, Sam and Tori, so all the actors’ acting is at the proper level, but not much different from what it was before. Oddly enough, the decisions of teenagers usually seem more justified than the decisions of adults, but when the dust settles, most fans will believe that everyone is where they should be, including Tori Nichols from Cobra Kai.

The last season of “Cobra Kai” gave many fans the impression that the series may lose its relevance, however, this record perfectly justifies the work on preparing the 4th season for a more impressive plot. Impressive is the key word, because, yes, Cobra Kai feels bigger, better, faster and stronger than last time, and even if not every fan likes it, it definitely plays to the strengths of the series.

Nostalgia used to be one of those strong aspects, but despite that, it’s rarely a driving factor here, as special cameos by Mike Barnes (Sean Kanan) and other Karate Kid 3 guests are more like nods than a path to follow. as were Crease and Silver. Speaking of which, the return of Martin Cove as the Sensei of the Crisis did not go unnoticed and works quite well as a side quest for the main characters.

In this sense, Kai’s Cobra humor remains almost untouched, and Johnny’s antics don’t do all the hard work, but remain just as appealing thanks to the character mentioning Top Gun. Perhaps the best explanation is that there’s just so much going on in the series that it’s amazing to see how beautifully it ends after so many deviations.

The fifth episode marks a significant cutoff in how the show’s story is told and where everyone’s priorities lie, but it’s hard to argue that this is a bad decision at all. Instead, asking where the show is heading next will definitely make the conversation more interesting, as the season ends with the feeling that Cobra Kai has reached incredible heights that he could aspire to.

The new additions work great, especially felt by Kim, played by Alicia Hannah-Kim, who is as dangerous as Silver, and whose thugs are perfect for showcasing a lot of fights. That’s because there’s probably more action in Cobra Kai than ever before, or at least it’s a lot more dangerous than ever in the four previous seasons. With the single exception of the only fight on Miguel’s trip to Mexico, it’s basically top-notch quality.

The expanded version of Jurassic World Dominion will be heading home...