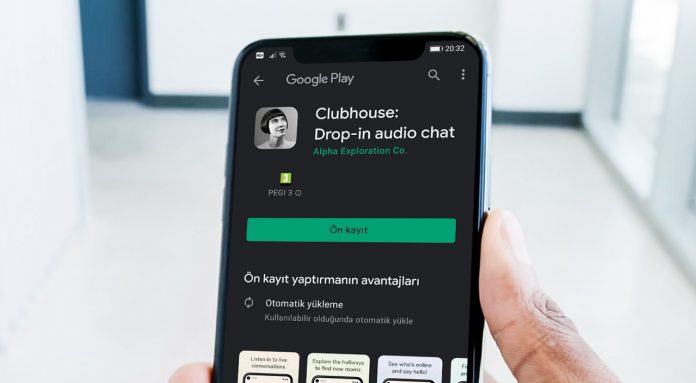 Clubhouse has always been exclusive to iPhone users since its launch. The Clubhouse, which shines in the pandemic period, currently has 8 million active users per month. However, the Clubhouse did not even reach the limit of 1 million downloads in the App Store last month.

There is a serious decrease in the number of users of Clubhouse, which works with the invitation system. While discussions continue about how the company will turn the situation in its favor again, the development of the application continues. Clubhouse officially entered the Android world today.

Pre-registration for Clubhouse has started

Clubhouse has released the official Android app on the Google Play Store as of today. The application, which is still in the testing process, has been made available to users in the USA. In other countries, the pre-registration process continues. Users who register through the Play Store will have the opportunity to access the application immediately after it becomes available.

What does Clubhouse offer to Android users?

After installing the Clubhouse on your Android phone, you log in with your phone number. If your number is invited, the system automatically detects it and creates your registration. Subsequently, Clubhouse, which connects to your guide, brings you people who have an account on the platform within seconds. If you want, you can make friends with your contacts.

After logging in to the application, you can create your own chat room if you want. You can make the room open to everyone, only with your friends or indoors. You can also join the existing rooms as a speaker or as a listener.

The Clubhouse will soon be opened to other English-speaking countries. The application with a package size of 11.70 MB will be tested with the users here. After fixing the basic known issues, it will be possible to install and use the application worldwide. In other words, the gradual release process that we are used to seeing in Android applications is also valid in Clubhouse.

Doesn’t work on Android and iOS at the same time

In the first trials, it was understood that Clubhouse could not be used with the same profile on Android and iOS. When the account open on the iPhone is logged in on Android, the application automatically logs out from the other phone. The opposite is also happening. While it is not known what caused the problem, Clubhouse officials remain silent for now.

Cases Of Depression And Anxiety Grew More Than 25% With Pandemic...

Statement from WHO on World’s First COVID-19 Pill: It Could Be...