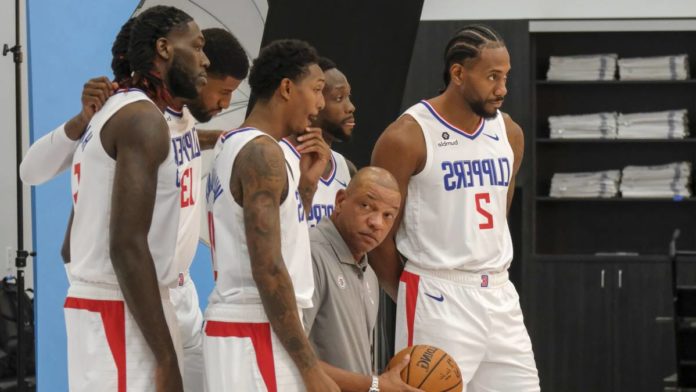 The already traditional survey that the NBA.com makes among the general managers of the 30 teams that will compete in the new season left this year to Los Angeles Clippers as the favorite team to be the champion, while the Greek power forward of the Milwaukee Bucks, Giannis Antetokounmpo, repeated as the MVP prize winner.

The forward Zion Williamson, selected as number one by the Pelicans in the past NBA college draw, was chosen as the most athletic player in the league before he played his first regular season game.

The Clippers to achieve the signings of the eaves Kawhi Leonard and Paul George, made them deserve to receive 82 percent of the votes of the general managers for them, and be the favorites to win for the first time in their history in title of League with 46 percent.

In addition to considering the acquisition of Leonard as the best with 67 percent of the votes.

The Clippers were ahead of the Bucks (36%) and their neighbors of Los Angeles Lakers (11%) after achieving the signing of center forward Anthony Davis.

The Golden State Warriors and the Portland Trail Blazers also received votes to be NBA champions for the Western Conference and the Philadelphia Sixers for the East.

The Bucks (76%) and the Sixers (24%) are the favorites to achieve the title in the East, with the Boston Celtics as the only other team that is given any chance of winning it with a vote.

In the West, along with the Clippers (66%) and Lakers (14%), the Houston Warriors and Rockets (7%), in addition to Trail Blazers and Denver Nuggets (3%), were voted as candidates to be champions .

Last year, the Celtics and the Warriors obtained 90 percent of the votes in each conference as favorites to the title, which did get the Golden State team in the West, but in the East they won the Toronto Raptors, new champions of the NBA

Antetokounmpo, who led the Bucks to 60 wins and a place in the Eastern Conference finals last season, received 52% of the MVP vote in the 50-question poll.

Base Stephen Curry (Warriors), Davis and Leonard were the other finalists, each receiving 10% of the votes.

Antetokounmpo, 24, is the pre-eminent young NBA star and 86% of general managers said they would choose him if they had the option to start a team from scratch, a percentage dramatically higher than the 30 who voted for him the year past.

Davis and Slovenian base Luka Doncic, who received 7% each, were the only other players who had votes.

Williamson, on the other hand, continues to win applause and praise amid an impressive preseason for the Pelicans after receiving 68 percent of the votes to be named Rookie of the Year of the league, with the bases, Ja Morant (Memphis) and Darius Garland (Cleveland) as the only other players who received a vote.

The Pelicans forward also got 68 percent of the votes to be the rookie who in five years is also the best in the competition, followed by Morant (18%).

Williamson (41%) and Antetokounmpo (28%) were also the only players who received more than 10 percent of the votes for being the most athletic player in the league.

In individual positions, Curry, bodyguard James Harden (Houston), Leonard, Antetokounmpo and Serbian center Nikola Jokic (Denver) were chosen as the best in each of the team positions.

The star LeBron James (Lakers) finished with a vote in the base position, 24% as a forward and 10% of power forward. Leonard was chosen as the best defensive player in the league, while he and George were selected the two best defenders outside the perimeter and the French center Rudy Gobert (Utah), inside.

Damian Lillard (Portland) was considered the best leader in the league, while Antetokounmpo beat James for being the most versatile player.

Once again, James was chosen as the player with the highest IQ of basketball, while Curry was selected as the one the GM would want him to make the last shot in the basket when a match had to be defined.

Among the coaches, 55 percent of the voters named Gregg Popovich (San Antonio) as the best in the league, followed by Erik Spoelstra (Miami), Mike Budenholzer (Milwaukee) and Steve Kerr (Golden State).