Home Sport “Claudio Bravo showed why he is a substitute” 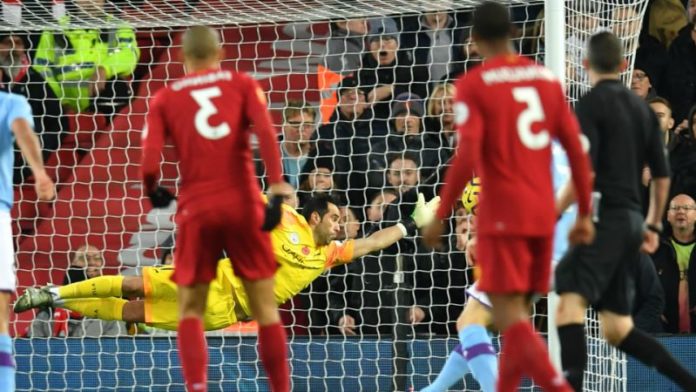 Manchester City suffered a tough 1-3 loss on Sunday against the undefeated Liverpool pointer, who took nine points ahead of Pep Guardiola’s team on the 12th date of the Premier League.

In the first quarter of an hour at Anfield, the Citizens fell by two goals to zero. Those of Jürgen Klopp demonstrated their forcefulness through Fabinho, who dispatched a tremendous shoe from outside the area, and Mohamed Salah, who hit a header to beat Claudio Bravo, headline against the injury of Ederson Moraes.

Of course, the controversy was installed in the third goal of the Reds, since the former captain of La Roja had a warm reaction in the conquest of Sadio Mané which meant 3-0 in the 51 ‘. In that sense, the performance of the national goal took the eyes of the English press, who strongly criticized its performance.

The Mirror qualified the formed in Colo Colo with note 4, the lowest of the crossing. “The weakest link. No fault in the first two, but guilty in the third. He seemed nervous, ”he said. The Sun, meanwhile, described the goalkeeper born in Viluco as insufficient and said that before those of Klopp “he demonstrated why he is the substitute goalkeeper.”

“Criticized by some in Fabinho’s goal, but he hit him well. He seemed a little nervous with the ball on his feet at times. A decent goalie for better Mane’s header, but Bravo was hit on his nearest stick. Maybe he trains with West Ham goalkeeper Roberto (who has also missed goals), “he said.

Finally, Independent noted the following: “He may not have been able to stop Liverpool’s first, but a better goalkeeper could have stopped Salah’s header.” In addition, the newspaper put the Brazilian goalkeeper as an example of his explanation: “He is a couple of centimeters taller and a decade younger than his partner. It is hard to imagine that his scope and reflexes had been defeated with a shot that ended almost in the center of the network, “they close.

It should be noted that in the subsequent press conference, the DT commented on the situation of the stellar goalkeeper, without criticizing Bravo’s performance. “Now he will go to Brazil to recover there with the hope that when he returns he will be fit,” said Guardiola, who hopes to have former Benfica for the game against Chelsea, on Saturday, November 23, after the FIFA date.

Leverkusen wins in Munich and for the Bayern streak