Home Entertainment Civil War, The Comic That Split The Marvel Universe In Two 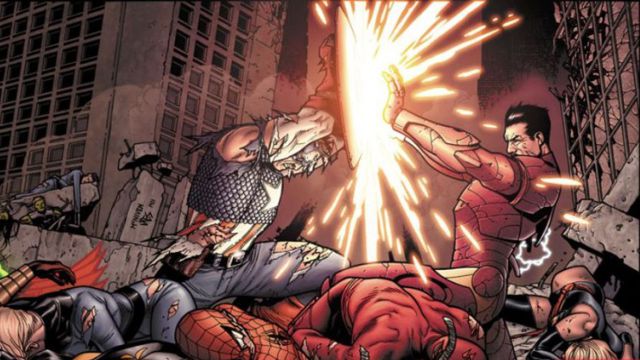 Civil War: In July 2006 Mark Millar and Steve McNiven put together a successful crossover that pitted superheroes against each other. Since the world of comics entered its adulthood in 1986, its universe was matched with what was happening in the real world, social reality had a great influence on the stories that were told in its pages. On September 11, 2001, with the attack on the Twin Towers, the world changed and the recurring debate between freedom and security was reactivated in the West. This dichotomy was transferred to the Marvel universe to give rise to one of the most shocking and momentous events in its history: the Civil War. A fact whose consequences would drag on for five years and that would affect the innumerable collections of La Casa de las Ideas, creating the most complex crossover ever seen.

The starting point of the separation of the superheroes into two camps was the Superhuman Registration Act, by which the heroes would have to reveal their secret identity to the Government and become part of a force that had to answer for their actions before the authorities. It’s an old idea that Walt Simonson already raised in 1989 in Fantastic Four #335, but that Reed Richards managed to stop in a speech at the Capitol. Bendis in 2006 planted the seeds of future conflict in his New Avengers series, with Tony Stark advocating registration at a meeting of The Illuminati (Charles Xavier, Iron Man, Doctor Strange, Namor, Reed Richards and Black Bolt).

Although Mark Millar (author of the revolutionary The Ultimates) was creatively responsible for the series, the truth is that the plot came from the best minds Marvel had at the time: Millar himself, Bendis, John Loeb, Joe Quesada, Joss Whedon, CB Cebulski and Tom Brevoort. At first it was Bendis’s idea for his New Avengers, but they immediately saw the potential and decided to extend it to all superheroes. The choice of the two leaders was clear from the beginning, one would be Captain America because of the values ​​he symbolized, while the other would necessarily have to be a character with enough weight to balance the scales and only one fit that profile: Tony Stark (Iron Man). At first the leader of the pro-registration side was going to be Steve Rogers, but they soon saw that the positions did not fit with the personalities of the characters, so they reversed the roles. Iron Man would go on to hunt down the rebels and Captain America would lead the resistance from underground. Shield was obviously on the official side while the mutants declared themselves neutral. Whedon was the first to point out that the story would need a winning side and that readers would have to be made to take sides based on their sympathies. While Tom Brevoort, the publisher, was responsible for coordinating all the collections and making the pieces from all the comics fit together as they should.

For the artistic part they turned to David McNiven, whose work in The New Avengers and Marvel Knight 4 had attracted attention, but who would find his consecration in this series. Despite his well-known lack of punctuality, an issue of the collection was delayed and this affected the entire Marvel universe, his great mastery has allowed him to remain one of the stars of Marvel. He has an absolute mastery of anatomy and an innate talent for compositions, also highlighting his facility for character and uniform design. Two years later, the creative couple Millar-McNiven would repeat sales and critical success with another great work: El Viejo Logan (2008).

A powerful marketing campaign was created under the slogan “Which side are you on?” and the saga became a great event from its first issue, with very important sales and receiving excellent reviews and numerous awards.

The story begins with a catastrophe in the city of Stamford (Connecticut) caused by a group of second-rate superheroes during the filming of a reality show. The heavy casualties and damage caused force the Government to make a decision on the heroic community and order them to register. Going to be treated as criminals those who did not agree to the procedure. With this approach, the heroic community is divided into two, the official side is led by Iron Man and has the main support of Reed Richards -who built a prison 42 in the Negative Zone to retain the rebels-, Doc Samson, She- Hulk, Ms Marvel, El Vigía and Wonder Man. While Cap had the support of Luke Cage, Daredevil, Falcon, Cable and Goliath. Spiderman was swimming between two waters and a lot of heroes and villains joined both sides as the story progressed.