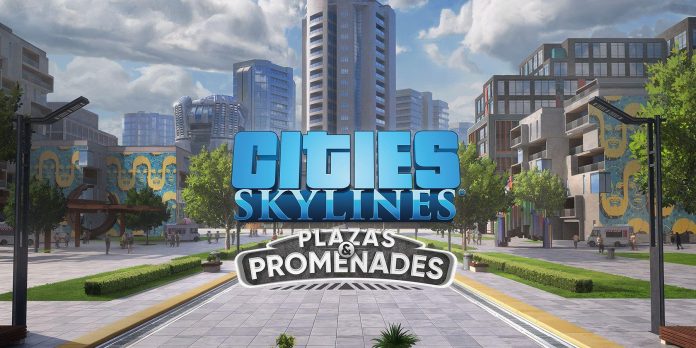 Cities: Skylines returns with the 11th expansion, Plazas and Promenades, this time focusing on more pedestrian-friendly and environmentally friendly elements of urban construction. All Cities: Skylines players also get a lot of new content thanks to a free update coinciding with the release of the add-on, including new roads, menu features and bug fixes.

Cities: Skylines has come a long way since its release in 2015 thanks to many major updates and additions based on the solid foundation laid by the developer Colossal Order. Fans of the genre consider this game to be the best urban planning experience, the game has been widely recognized by critics and the public due to the depth of the city management gameplay, while remaining intuitive enough for beginners to develop a noisy small town without any problems.

Plazas and Promenades is the 11th expansion for Cities: Skylines, the key features of which are various squares of the same name, promenades and pedestrian—friendly construction options that allow players to develop their urban design in completely new directions. New pedestrian streets allow citizens to move freely from one point to another without interference from cars and noise pollution. Designated pedestrian zones may also be placed, prohibiting the use of vehicles in this area, reducing automobile traffic in an environmentally friendly way.

Several new policies may also be adopted. These include “Slow driving“, which provides a lower speed limit in the area, “Sugar Ban“, which reduces the level of happiness of citizens while increasing their life expectancy, “Street music”, which increases both the level of happiness and noise pollution in pedestrian commercial areas, and “Delivery of everything”, which forces buildings in the area to use service points to receive cargo and garbage.

New area specializations include office areas, high-density residential areas, and high-density commercial areas. Specialized areas will get a new look and game effects, in this case, the new specialized areas will have a modern wall-to-wall building layout with 24 new designs. New aesthetically attractive buildings of city services that match the visual style of pedestrian zones can be placed to further increase the level of happiness in the area. The free part of the update also features 9 new small roads, 4 new large roads, 5 new highways and a new “Exit after saving” feature. All of this new content is likely to be further enhanced thanks to the excellent Cities: Skylines modder community.

Since the add-ons are still being released seven years after the game’s release, the possibility of a Cities: Skylines sequel is still up in the air. Colossal Order shows no signs of slowing down the development of Cities: Skylines, so it may take several more years of additions and updates before the next part appears on the table.

Cities: Skylines is available on Nintendo Switch, PC, PS4, Stadia and Xbox One.

The Walking Dead: It confirms what we suspected about Mercer and...