Home Entertainment Chucky, Season 2: All the Legacy Characters who may Yet Return (and... 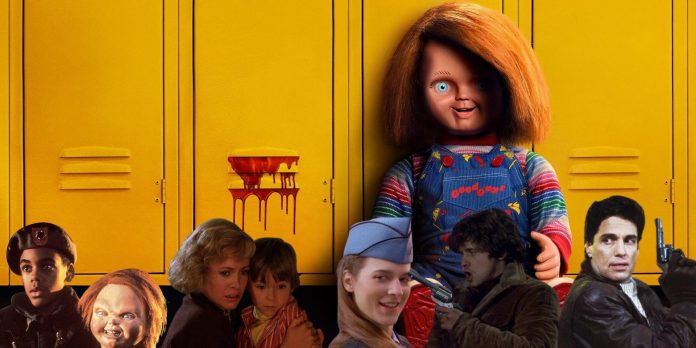 Chucky season 1 does a remarkable job of bringing in a slew of Child’s Play legacy characters, but there are still a few more who can return to Chucky season 2. Some of the iconic legacy characters who were in season 1 are Andy (Alex Vincent), Kyle (Christine Elise), Tiffany (Jennifer Tilly), Nica (Fiona Dourif), and of course, Chucky (Brad Dourif). Having a good amount of original characters made the show equally enjoyable for hardcore fans as it is for newcomers who are the same age as the new generation: Jake (Zackary Arthur), Lexy (Alyvia Alyn Lind), and Devon (Björgvin Arnarson).

Original writer and creator Don Mancini is responsible for bringing the iconic killer doll to Syfy. With him, original producer David Kirschner and most of the original Child’s Play cast returning are to thank for the show’s same campy feeling. Mancini has teased multiple times that more characters will return to Chucky season 2: “I love those characters, and you probably haven’t seen the last of them. Stay tuned.” (via Bloody Disgusting)

Related: The Perfect Setup For Chucky Vs Freddy Kreuger Already Happened In 2021

Chucky was renewed for a second season almost immediately after the season 1 finale. The show did incredibly well, scoring a 91% on Rotten Tomatoes (the highest score of the entire franchise). Chucky season 2 is destined for the same outcome as the first season, especially if more legacy characters return. Here is a breakdown of every legacy character who can still return for Syfy’s Chucky season 2 story, and how.

Detective Mike Norris (Chris Sarandon) hasn’t appeared in any of the Child’s Play movies since the original film in 1988. In Child’s Play, he was the detective on the case of six-year-old Andy Barclay, investigating why everyone around him kept dying horrific deaths. It wasn’t until halfway through the film that Chucky sneaks into his car and attacks Mike, finally giving him proof that the doll is indeed alive and responsible for all the murders. The film ends with him killing Chucky by shooting him, saving Andy and his mother Karen.

Now that thirty-plus years have passed, Mike can return to Chucky season 2. Although he is not in any of the returning films, he is briefly mentioned in Bride of Chucky (1998) and Curse of Chucky (2013), suggesting he is alive. In the post-credits scene of Curse of Chucky, when Andy is on the phone with his mother Karen, a zoomed-in shot shows a picture of Mike and Karen together. Andy asks his mom how Mike is doing, likely referencing they are married. With Mike and Karen both confessing that a doll has been committing all the kills, it is likely Mike has been locked up or at least fired from his detective duties. In Chucky season 2, the two can receive a call from Andy, telling them that Chucky has returned yet again.

Andy Barclay made his return to Chucky season 1, and now it’s time for audiences to catch up with his mom. Like Detective Mike Norris, Karen Barclay (Catherine Hicks) hasn’t been in any films since the original movie but is mentioned in Child’s Play 2 (1990) and the universally-hated Child’s Play 3 (1991). In Child’s Play 2, Andy is sent to a foster home, as Karen has been locked up in an institution. In Child’s Play 3, which takes place almost a decade later, Karen is still in the institution. As mentioned earlier, she is referenced in Curse of Chucky, and she is likely married to Mike. This means not only did she get out sometime in between Child’s Play 3 and Curse of Chucky, but she is also happily married. Andy is incredibly close with his mother, and she is one of the few people who understands him more than anyone. Because of this, it makes sense for both Karen and Mike to return to Chucky season 2.

Quite possibly the most wanted returning character is Chucky and Tiffany’s child Glen/Glenda. Seed of Chucky (2004) introduced the universally loved character, the shy doll who doesn’t want to be a killer like their parents. The film was way ahead of its time, with Glen not knowing if they want to be a boy or a girl, actually suggesting that they may be both. Although not mentioned in any of the films after Seed of Chucky, Glen/Glenda was finally referenced in Chucky season 1, episode 2, “Give Me Something Good To Eat.” When talking to Jake, Chucky mentions his “gender-fluid kid.” Glen/Glenda is also mentioned in Chucky season 1, episode 8, “An Affair To Remember,” where Tiffany says Glenda has “exquisite taste” about a bomb they gifted her.

At the end of Seed of Chucky, Tiffany (in Jennifer Tilly’s body) gives birth to human twins: Glen and Glenda. In Chucky season 1, both Chucky and Tiffany reference their child as differing genders, which provides context that Glen/Glenda are living as their preferred genders. Seed of Chucky was released in 2004, which means Glen/Glenda are now 18-year-olds, likely seniors in high school. With Jake, Lexy, and Devon entering high school in Chucky season 2, it would make sense if they were at the same school as the crew.

Eddie Caputo was Charles Lee Ray’s partner and accomplice in the original Child’s Play movie. Detective Mike Norris chases him and Ray, yet Norris only successfully kills Ray. Ray uses voodoo to put his soul into a Good Guy Doll, and the rest is history. In the original film, in the doll’s body, Chucky burns down Caputo’s house, seemingly killing him. Although assumed dead, both fans and even creator Don Mancini himself believe he could still be alive: “But did he die? Do we know that he died?” (via Fandom) It would be interesting to see him come back alive as an aging killer trying to get his revenge on Ray.

Related: Every Death in Chucky Season 1

Tyler (Jeremy Sylvers) is in Child’s Play 3 as a young cadet who befriends Andy while he is in military school. Child’s Play 3 is one of the most hated movies in the franchise, and for a good reason. For one, it recasts Alex Vincent’s Andy with Justin Whalin, and creator Don Mancini said he simply ran out of ideas. Chucky season 1 completely glosses over this film, which is surprising considering all the trauma Andy went through in military school.

Tyler was a new addition to the franchise as Chucky’s latest victim, trying to convert his soul into him. It would be exciting and help fix the hated film by bringing in Tyler, seeing where he is now: does he struggle with PTSD? How did he recover from being stalked and almost murdered by the killer Chucky doll?

The last character who could return, and actually might, is Kristen De Silva (Perrey Reeves), another character from Child’s Play 3. Kristen plays Andy’s friend and loves interest, but, like Tyler, she hasn’t been referenced since the 1991 film. Creator Don Mancini teased her possible return: “Perrey Reeves is down for coming back! I saw she recently posted something where fans were asking her ‘Would you want to be on the show?’ and she was incredibly gracious and enthusiastic, saying, ‘Hell yeah I’d like to!’” (via Fandom)

Since Andy being married or in a relationship hasn’t been confirmed or denied, this would be an excellent way for Kristen to come back for Chucky season 2. It would add a new subplot of the two reconnecting. After all, she is one of the only people that can relate to Andy being stalked by a killer doll. It would be a fantastic Chucky twist for the upcoming second season.