Home Celebrity Christopher Nolan is impatient for the series on ‘MacGruber’: “The world is... 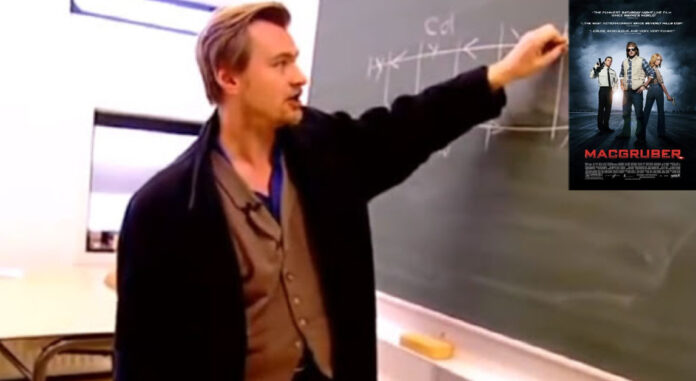 Although for me there is no doubt about it (see here), it is easier if a filmmaker like Christopher Nolan explains that he is a fan of a movie like ‘MacGruber’. That says a lot about the British director, an enigma that, like many of us, cannot cope and needs the television series to arrive as soon as possible.

The comedy of the century

On May 21, 2010, the film directed by Jorma Taccone, a third of The Lonely Island, hit theaters with a film that had a budget of $ 10 million. He finished his business career below those numbers and did not obtain any kind of public or critical support. But today all that seems that it never really happened.

Now it turns out that everyone is a fan of the movie starring Will Forte, the most mind-blowing post-Will Ferrell talent out of SNL. And as it has been told for a long time, Christopher Nolan has a special weakness for the film. Details like those are worth more than a thousand Dunkirks.

Speaking to Vanity Fair, Taccone recounted how he heard Nolan from his film after hearing Anne Hathaway tell a story about the director reciting lines from the film while filming ‘The Dark Knight: The Legend Reborn.’

“I was like, shit. That’s amazing,” said Taccone. “My wife [director Marielle Heller] and I were at our first Directors Guild of America dinner and she warned me: Christopher Nolan is there. You have to go say hi. “So I went up to him and said,” My name is Jorma. I directed that movie called ‘MacGruber’. In time we will make a sequel. What do you think about this ?: When the director’s credit appears, it will read: Directed by Christopher Nolan with an asterisk, and then, at the end of the film, there will be another asterisk that will say who actually directed it. “And he said: ‘ Let me talk to my wife about it. ‘”

Unfortunately the sequel to ‘MacGruber’ has not arrived yet. However, a decade later, the movie’s popularity is on the rise, and it appears that Peacock (NBCUniversal’s new streaming service) is developing a television series based on the character, with the return of the cast and crew of the movie. And adding more wood to the connection with Nolan, Taccone spoke of another situation involving the filmmaker and Mac, this time regarding the upcoming television series.

“I invited Christopher Nolan to read the pilot. And sent the best fucking email. It was an amazing way to start the reading, “said Taccone.

According to Vanity Fair, to whom Taccone showed the letter, Nolan’s email said: “Although I cannot be there in person to see you take the first step of your odyssey, I know that my spirit will be with you, and even if it is unfair to add to the great sense of responsibility that you must already feel, I am obliged to tell you: the world is waiting, the world is watching “.

A release date for the ‘MacGruber’ series has yet to be announced, but it is clear that Peacock will have a subscriber eagerly awaiting those episodes. And probably Christopher Nolan is also there with the season ticket.

Bella Hadid for her shoot for Vogue magazine