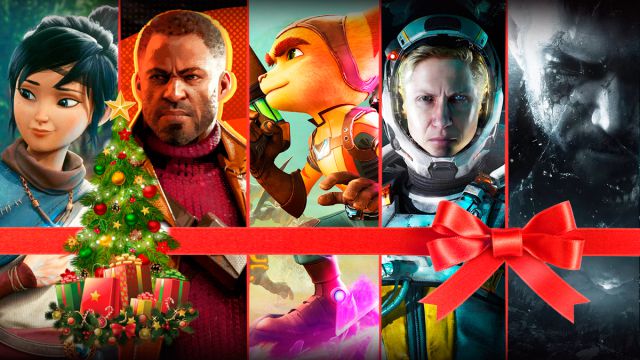 PS5: We present the Christmas shopping guide with the most outstanding titles released this year for Sony consoles: PlayStation 4 and PlayStation 5. Christmas is an ideal time to catch up with all those titles that we have left on our shelf or on the to-do list throughout the year. About to say goodbye to 2021 and despite the problem with the lack of components that has caused a significant lack of stock in new generation consoles, many players have managed to get hold of a PlayStation 5. For them and for owners of A PS4 console we bring you this report in which we review those most outstanding games that have been published over the last 12 months and that we can buy to enjoy the free time that this Christmas season gives us.

On the other hand, we remember that we have also brought you similar reports but focused on the Xbox family, Nintendo Switch and platforms such as PC, to cover all kinds of playable needs and open the range of offers as much as possible. As we prepare for a promising 2022 that makes the most of the capabilities of the next-gen in which we are already immersed, we have to clear the list of pending works and close this year in style enjoying great essential games.

Ratchet & Clank: A Dimension Apart
Platforms: PS5
One of the great exclusives of the year is translated into the new adventure of Ratchet & Clank, Rivet and company. The lombax pair force their way through interdimensional rifts to end the threat that stalks the entire galaxy. With a constant change of situations, mechanics and locations, it makes use of the next-gen capabilities that PlayStation 5 offers to provide us with almost immediate loading, ray-tracing, special use of the DualSense and much more. Impressive at the audiovisual level and very fun at the controls, it is an essential if we are owners of a PS5 console, whether we have already accompanied Ratchet and Clank on previous adventures or if we meet them now for the first time.

Returnal
Platforms: PS5
The action-packed adventure developed by Housemarque represents a challenge at the controls that only a fraction of the players will be able to face. With a roguelike-based system, repeating a loop to the end is challenging but also very satisfying. It’s one of the titles that has made the best use of the hardware capabilities of this year’s PS5, even with 3D Tempest audio and clever use of DualSense. With a narrative that engages from the beginning, we will want to accompany Selene until the end to be able to understand all the mysteries that are hidden in Atropos. Of course, it is important to point out once again that it is a demanding title with an appropriate difficulty curve based on experimentation and learning. Risk has its reward, but are you willing to risk it?

Deathloop
Platforms: PS5 and PC
Speaking of loops … we continue with the new proposal from Bethesda and Arkane Studios, a studio that is always synonymous with quality. Exclusive on PS5 consoles but also available on PC, this is a curious action play centered on the mysterious island of Blackreef, where all the inhabitants live in a loop from which they cannot escape. The only ones who are aware of such repetitive cycles are the protagonists, Colt and Julianna. The former wants to destroy said loop so that everything returns to normal, while his adversary intends to do everything possible to prevent said mission from being carried out. For this reason, they will be constantly confronted while Colt learns to finish off all his adversaries in a totally customizable way thanks to his powers (through stealth, in a chaotic way, etc.). In general, it is an essential title for those who enjoyed the Dishonored saga and other works such as Prey.

Kena: Bridge of Spirits
Platforms: PC, PS4 and PS5
A beautiful and surprising work by Ember Lab that is balanced, fun and simple for any type of player to complete. In the story we accompany Kena, a young woman whose mission is to help lost souls to achieve ultimate peace. Accompanied by the friendly Rots (a kind of small and adorable creatures), she makes her way through a magical and visually beautiful world. With small peaks of difficulty in the boss fights and the series of puzzles and platforms that it presents, it is an ideal combination to discover one of the great surprises of this year 2021.

Guilty Gear Strive
Platforms: PC, PS4 and PS5
The great fighting title of the year. Developed and edited by Arc System Works, it is a new installment in the Guilty Gear saga that keeps the bar high thanks to its graphic section, which mixes 2D with 3D with cel