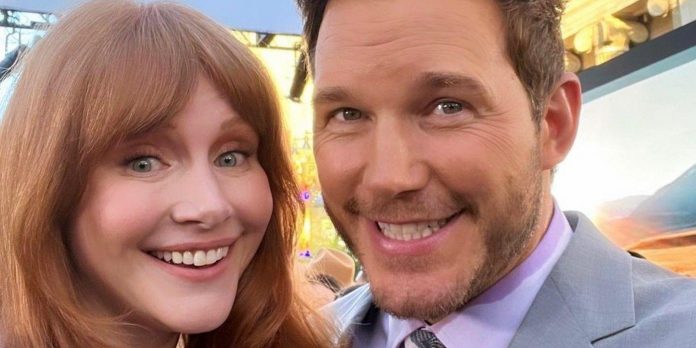 Chris Pratt from Jurassic World on social media congratulated his co-star Bryce Dallas Howard with a cute post. Pratt and Howard first joined the Jurassic Park franchise in the 2015 soft reboot of Jurassic World. Despite the mixed reviews, the film turned out to be extremely popular among viewers: “Jurassic World” grossed more than $ 1.6 billion at the box office. As a result, the film became the second highest-grossing film in 2015 after “Star Wars: The Force Awakens” and the seventh highest-grossing film of all time (without adjusting for inflation). As a result of its financial success, Universal Pictures expanded the franchise with two animated series, video games and two direct sequels of Jurassic World.

Pratt and Howard returned to their roles as Owen Grady and Claire Deering in Jurassic World: The Fallen Kingdom in 2018, and then in Jurassic World Dominion, the last film in the saga that began in 1993 with Steven Spielberg’s Jurassic Park. The last film brought together the main actors of the original film and the main actors of the Jurassic World franchise in the final send-off of the franchise. However, producer Frank Marshall left the future of the franchise open for new projects. As the film continues to be shown in theaters, Pratt honors his beloved partner in the film.

On the one-month anniversary of the release of Jurassic Word: Dominion, Pratt took to Instagram to celebrate Howard with a cute post. The actor praised Howard for her work on the film series and recalled their journey of making three films over the past eight years.

Pratt’s post is a touching tribute to his co—star in the film, in which he calls it an “honor” to have worked with her for the better part of a decade. The stars of the Jurassic World trilogy, Pratt and Howard, seem to have become close friends behind the scenes, which undoubtedly had a positive effect on their performance on screen, as the duo was praised for their chemistry in the films. Now that their story with Jurassic World Dominion has come to an end, Pratt’s post on social media is a sincere message of gratitude and absolute respect to his longtime colleague and friend.

Since Jurassic World Dominion is announced as the end of the franchise, Pratt and Howard’s tenure on the series is probably over. There’s always a chance they’ll come back for another project in the future, but there don’t seem to be any immediate plans for the future part. But since Pratt and Howard established a special bond and friendship while working on Jurassic World, it would be interesting to see them reunite in another movie or TV show. Howard has a thriving directing career thanks to her work at Lucasfilm, so maybe she could play Pratt in something. Pratt, of course, is also known for playing Star-Lord in the MCU, and with the number of Marvel movies and series in development, Howard could also join the franchise. Let’s hope that Jurassic World Dominion is not the last time they are together on the screen.

The One: Netflix’s new sci-fi series gets a trailer