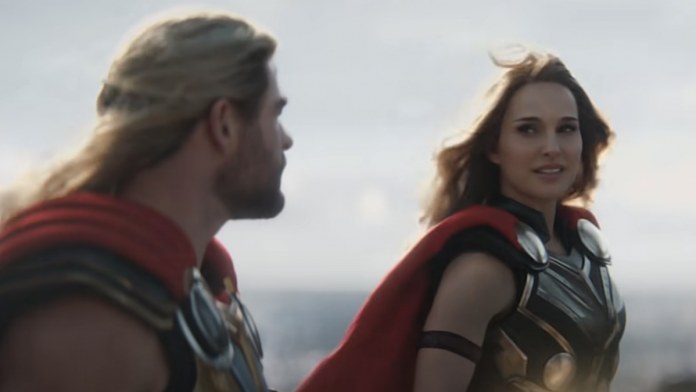 When people play superheroes in movies, you can easily see an actor as a superhero. Fans love Robert Downey Jr. and Chris Evans, and it’s true that they seem like really nice people, but the real MCU hero might be Chris Hemsworth. Both Tessa Thompson and Natalie Portman can’t say anything bad about this man, and he made an incredibly nice gesture to Portman during her return to the MCU in “Thor: Love and Thunder,” so Portman didn’t have to kiss a guy who had just eaten meat.
Natalie Portman and Tessa Thompson recently appeared on the Capital Breakfast program with Roman Kemp, where the host admitted that he was seriously “in love” with Hemsworth and wanted to know if he was really as good a guy as he seemed. Neither of them said anything against the actor Thor, and Portman said that before kissing Hemsworth on screen, the actor stopped eating meat for his vegan partner. Portman explained…
The day we had the kissing scene, he didn’t eat meat that morning because I’m vegan. And he eats meat every half hour. Like, it was so thoughtful.
Part of getting in shape to look like a superhero involves a proper diet, which usually involves eating smaller portions, but much more often than most of us. Future MCU star Will Poulter spoke about the difficulties he had with the diet. This is obviously due to a lot of protein, so Chris Hemsworth needs to eat meat “every half hour.” And the food is apparently really good, as Hemsworth apparently has an incredible private chef. But Hemsworth apparently took a break in the morning during his romantic scene simply because he was thinking about Natalie Portman first and thought she would appreciate it.
And, obviously, Natalie Portman really appreciated it. Although Portman is a vegan and has publicly criticized the meat industry, it doesn’t seem like the person she’s supposed to kiss in the movie has ever eaten meat or not. But perhaps that’s another reason she found the gesture so thoughtful. Portman continued…
It’s not something that makes me angry or worried, but he was just thinking. He’s just a very nice person.
No one asked Chris Hemsworth to take a break from eating meat. This man just thought he could do something that would make life easier for someone else, and he did it. It really was a kind gesture. Does this make Chris Hemsworth “The Best Chris?” It will certainly boost his reputation among a lot of fans.

Raft: where to find trading posts