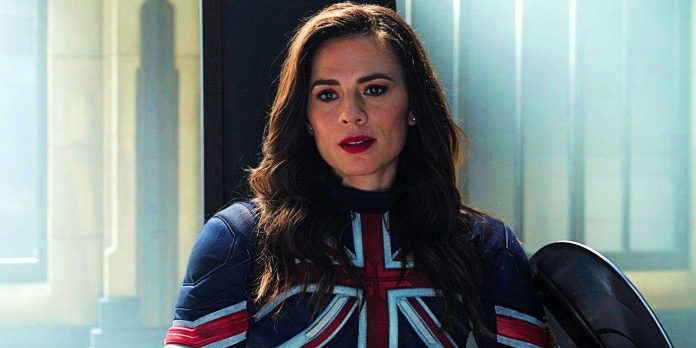 Warning: SPOILERS ahead for “Doctor Strange in the Multiverse of Madness”

Actor Chris Evans praises Hayley Atwell for her role in Doctor Strange: The Multiverse of Madness. Evans has long been associated with Marvel, giving birth to one of the most recognizable characters: Captain America. His Steve Rogers first appeared in 2011 and has since starred in 11 films (including scenes after the credits). Evans’ time as Captain America finally came to an end in 2019’s Avengers: Finale, when he handed over his iconic shield to Sam Wilson, also known as The Falcon (Anthony Mackie).

The Captain America title and storyline were explored with several different comic book characters, with familiar faces such as Clint Barton and Bucky Barnes, each of whom took up the shield at some point. Also included in this list are Sam Wilson and Peggy Carter. Peggy Carter was introduced on screen as Captain Carter in the first episode of the Marvel series “What If…?”. In the episode ​​​​Peggy Carter becomes the world’s first super soldier to replace Steve Rogers after he is seriously injured. After that, Atwell appeared in the Marvel cinematic universe as Captain Carter in Doctor Strange: The Multiverse of Madness.

Related: Will Captain Carter return? Hayley Atwell’s Explanation of the Future of the MCU

During an interview with MTV News, Evans was asked what he thought of Captain Carter Atwell. Evans admits he hasn’t seen “Doctor Strange in the multiverse of madness,” but with his busy schedule while working on Pixar’s “Lightyear,” it’s easy to see why. Although Evans hadn’t seen her perform yet, the actor had nothing but praise for Atwell. Read his quote below:

I haven’t seen [Doctor Strange in the multiverse of madness] yet, but I’ve heard. I mean, she’s perfect for that. … She’s really just one of the best actresses I’ve ever worked with, and just one of the most wonderful people. So I couldn’t be happier for her.

Evans and Atwell previously worked together on Captain America: The First Avenger, where they were both featured in the MCU. Since then, Atwell has constantly appeared in Marvel and even featured in her own spin-off. Agent Carter worked for two seasons before, unfortunately, being canceled.

With her reappearance as Captain Carter in Doctor Strange in the Multiverse of Madness, there are rumors that Atwell may return to the Marvel cinematic universe for another live performance. Rumors suggest that Peggy will be at the center of another MCU spin-off starring Captain Carter. It seems unlikely that it will be Captain Carter from 838, given her brutal death during Wanda’s encounter with the Illuminati, but the multiverse opens the door to exploring the many Captains of the Carters. Regardless of whether or not Captain Carter Atwell appears again in the MCU, it’s clear that she enjoys the support of her “Captain America” co-star.

Microsoft Buys Activision Blizzard, The Creators Of Call of Duty And...