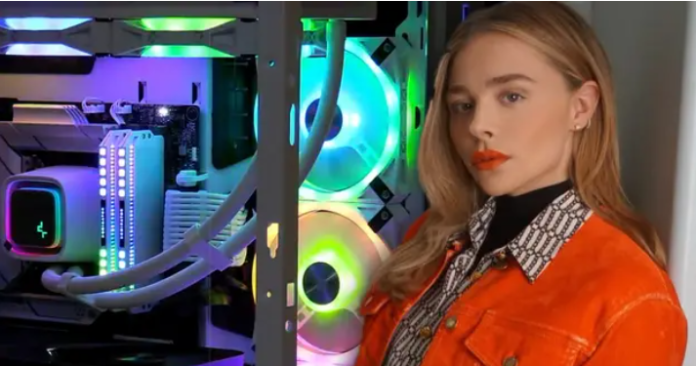 Custom PC assembler PowerGPU has just unveiled Chloe Grace Moretz’s $4,000 PC assembly just days after she mentioned wanting to get it on Twitter.

When Chloe Grace Moretz is not starring in her latest TV show or movie, she can be found in a variety of games, such as Destiny, Final Fantasy and others.

Chloe recently revealed that she couldn’t stop playing the beta version of Call of Duty Modern Warfare 2, and just a few days later took to Twitter to ask what she would need for a full-fledged gaming PC.

PowerGPU custom PC builders quickly came to the rescue and finally presented the final version of their $4,000 PC build.

Just a few hours after her initial tweet, PowerGPU posted photos of the first version of her PC on Twitter, but things soon changed a bit.

Nvidia stepped in and offered a completely new version of Founders Edition RTX 4090, which prompted the company to provide Chloe with quite a few updates along with it.

They streamed the build process live on Twitch as PowerGPU founder Heze Martinez answered questions in a chat while Roxaxl assembled the massive machine.

Great time watching this come alive! So damn good looking, great job Roxxal and J Can’t wait for you to stream @ChloeGMoretz ! If you ever need a carry for Warzone 2.0 let me know 😎🔥

As reported by Igors Lab on October 27, the supplied adapter for the RTX 4090 has several weak points in the assembly, which leads to its overheating and the beginning of melting of the adapter, as well as the power plug of the GPU.

PowerGPU has not yet sent a PC to Chloe, but she has already shared her excitement about the upcoming release of Warzone 2.