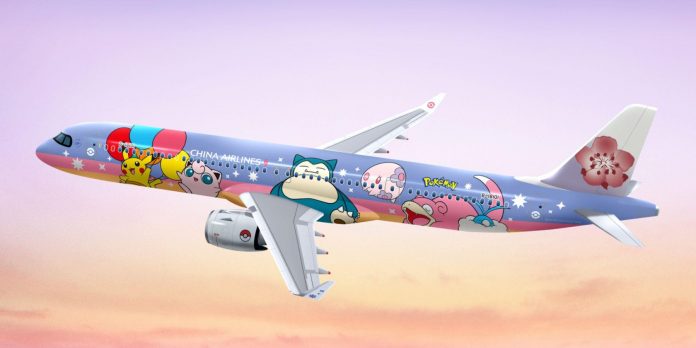 Chinese Airlines has announced a new Pokemon-themed plane. It joins a growing list of themed aircraft in several airlines in Asia. Pokemon planes are among the most common and popular flying inside Japan and abroad, and this is the newest in this line.

China Airlines announced this at a conference in Taipei on July 27. The disclosure of the new design of the aircraft was made not only by employees of China Airlines, but also by Pikachu himself, dressed in a pilot’s uniform. Chinese Airlines said they want to create an airplane that will welcome people into the sky after several years of inactivity due to COVID, and will interest everyone in the prospect of traveling again.

The China Airlines plane is part of their “Pokemon Air Adventures” series, and this latest plane is called “Pikachu Jet CI”. CI is the code used by China Airlines flights. The plane is painted so that it looks like the dawn sky, with stripes of light purple, pink and yellow colors.

Of course, the plane is also decorated with Pokemon. Pikachu, Jigglypuff, Snorlax and others are outside the plane along with funny balloons, sparkling stars and flowers. There have been no photos inside the plane yet, but it will probably follow the Pokemon theme as well. Other themed planes usually have decorated seats, cups, and even merchandise matching the theme on the outside.

In addition to this latest Pikachu Jet CI, Pikachu Jet C1 and C2 are already flying in the sky for Skymark Airlines, mainly domestically between Okinawa and other areas of Japan. The Japanese airline ANA also has Demon Slayer and Star Wars aircraft, which are currently operated inside Japan. All of these planes are themed inside and out, and their flight numbers are available on the official airline websites, so fans can do their best to book special planes.

Pikachu Jet CI is due to take to the skies this fall, mainly serving the route between Tokyo and Taipei. Closer to the moment when the plane really starts, more information should appear. The Pokemon Sky Adventures initiative also says there will be new Pikachu Jets coming soon with other airlines, so this is just the beginning.

In the past, some Asian airlines like ANA have also served the United States and Europe with their themed planes, so hopefully fans outside of Asia will get a chance to experience them soon too. We hope that more flight routes will be announced soon, especially since travel around the world is opening up again, and people are starting to fly more than ever again.

The strongest fusion of Dragon Ball Super is not between Goku...