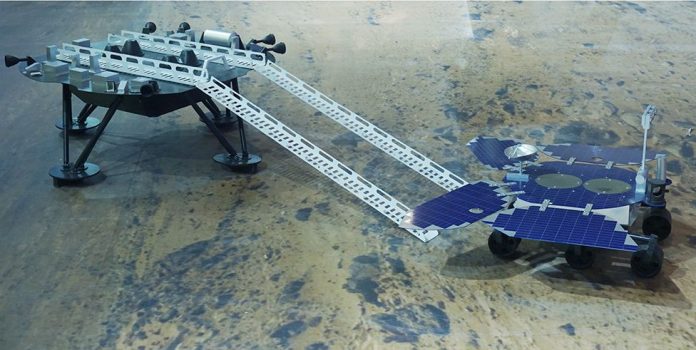 China has released new images from the Zhurong rover, which began navigating the surface of Mars in late May. Among them is a beautiful selfie photo of Zhurong posing next to the landing platform. As China’s National Space Administration put it in a blog post, the “traveler group photo” was taken with a small wireless camera that the rover had placed on the surface before the rover lined up for the shot like an excited parent.

Zhurong also took a self-portrait photo of the landing platform, showing the traveler descending ramp, the Chinese flag, and the Beijing Winter Olympics mascots you’ll see if you look closely to the left of the flag.

More photos are featured in the following Twitter thread, including a panorama showing the Red Planet’s horizon in the distance beyond the rover, and traces on the surface from the ejection of propellant during the descent:

So, Zhurong went and placed a remote camera on the ground and then went back towards the lander for this group photo in Utopia Planitia, Chinese flags lined up and all. Quite the effort. [CNSA/PEC] pic.twitter.com/tvx2mnaLNh

Zhurong joined NASA’s Mars-based spacecraft Perseverance last month. However, there is a distance of kilometers between the two passenger vehicles. With Zhurong, China became the second country on the planet to have landed and operated a rover. The vehicle is expected to continue its explorations for about 90 days. It will capture more images as it analyzes the Martian climate and geology.

Last April, Perseverance sent some attractive photos of herself using a robotic arm, which we can also describe as a selfie stick, instead of putting the camera down and stepping back. This was a family photo of both the traveler and his little helicopter friend, Ingenuity. NASA details how the selfie photo was prepared in this blog post along with videos.