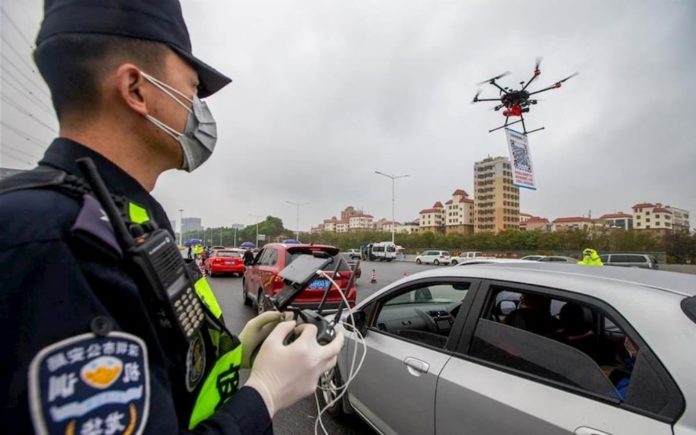 The Chinese government has started using drones to combat the Corona virus, which has been affecting many major cities for some time. These drones taking off in many cities are used to warn citizens.

China is using all kinds of ways to combat the Corona virus, which appeared in late 2019 and caused many deaths. One of these roads looks like drone flying over the city of Shenzhen. Rapidly spreading images on Twitter show that drones are being used in many cities across the country.

How is #tech used in China’s battle against the #coronavirus? Drivers lining up to enter #SH scan the QR code on a card hanging by a #drone to fill in their health info pic.twitter.com/dhzAapxxkN

Chinese officials use these drones specifically to alert citizens. The first of these warnings is made through loudspeaker drones that ask Chinese citizens to wear their masks to protect themselves from Corona virus infection, which is transmitted through airborne bacteria. This way, citizens can be warned about wearing masks.

The second method of warning is done through drones with QR code posters. Health status is recorded when citizens read this code via mobile phones. Authorities probably use these records to track citizens’ health and provide information.

The withdrawal decisions, which came one after another from many giant companies, had a negative effect on the course of the event and it was decided to cancel the event. The comments made by GSMA CEO John Hoffman cited the Corona virus outbreak, which put efficiency in an extremely difficult situation as the cause of the cancellation decision.

A report from France in the morning today reported that an 80-year-old Chinese tourist died in the hospital where he was treated in Paris for the Corona virus. With this news of death, one person died in Europe for the first time due to the Corona virus. The cancellation of an event in Europe with the participation of tens of thousands of people can therefore be a very reasonable decision.

Visual of the web version of Microsoft XCloud is revealed