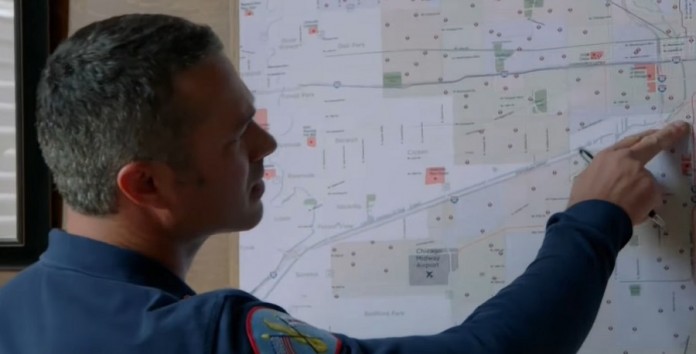 Chicago Fire: Taking up some of the dilemmas presented to firefighters the previous week, the 10×7 episode of Chicago Fire brought the continuation of Severide’s (Taylor Kinney) investigation into a mysterious arsonist. The case developed in a church, whose main victim was the local parish priest.

So, find out everything that happened in season 10 of the series by reading our full recap!

Chicago Fire 10×7: Who Should Severide Fear?

The one titled “Whom Shall I Fear?” (Whom should I fear?, in a free translation) begins with Severide noting that his main clues about who would have set the church on fire cannot be developed, especially because Father Anthony, one of the victims, is in serious condition in the hospital.

That way, his only alternative was to try to analyze the fire again. Who appears in this context is Pelham (Brett Dalton), appointed to continue the investigation.

The lieutenant in question was accompanied by his team, which included Gallo (Alberto Rosende). Somehow, the officer showed to be quite willing to find a solution to the case, but Gallo ended up not obeying his orders, which caused a great tension among those present.

Later, Mouch (Christian Stolte) overheard Pelham yelling at Gallo, but chose not to interfere as a matter of authority. For his part, Gallo didn’t want to discuss the matter with anyone either, but he seemed quite embarrassed by the whole situation. Later, Boden (Eamonn Walker) asked the others what they thought of Pelham, as he wanted him in the corporation instead of Casey (Jesse Spencer).

Mouch doesn’t intervene in the matter and cites Stella (Miranda Rae Mayo) as a possibility, but Boden soon dismisses her because of her show with girls. A new call comes in and firefighters need to be nimble to contain a fire in another church. However, upon arriving at the scene, Severide, accompanied by Seager (Andy Allo), realizes that it was a false alarm.

The firefighter receives the news that Father Anthony has passed away and also discovers that he was being investigated by the Archdiocese, considering that his church was very progressive. As a result, some questions arise in Severide’s mind, as he searches for Larry (Mark D. Hines), the parish caretaker, after talking to a group of nuns.

Behind the crime, the man claimed that he just wanted to protect the church from modernities. With a warrant in hand, Severide sets out to look for evidence at his house. Larry lived with his mother and was building a car bomb. When Severide least expects it, the man activates the bomb and dies during the explosion.

Holly and Bridget from “Girls Next Door” described in great detail...

The Valyrian Dagger of the House of the Dragon is an...