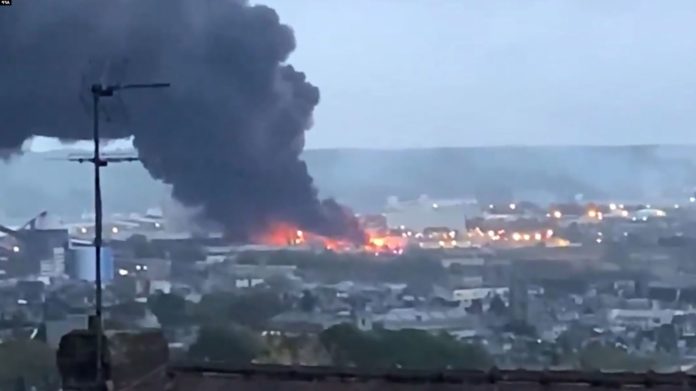 PARIS –
4 days ago in the city of Rouen, exploded Lubrizol chemical factory in the face of poison emitted and by the authorities made a statement as “no danger”, the people of the city revolted.

The Rouen Governor’s statement after the fire “no poisonous substance, do not worry,” made public anger. Birds and fish died, producers poured 50 thousand tons of milk, products are collected from the field of warning in the city, the polluted fish in the Seine River was warned not to eat.

Authorities do not trust the public stating that the fire is still under a heavy smell despite the passing of 4 days in the city wanders around. Despite all these signs, the governor and the government did not believe his “no poisoning” statement.

Firefighters and employees who intervene in the fire are in contact with significant toxic fumes. Among the population, cases of headache, nausea, vomiting and diarrhea increased.

On the other hand, the schools closed after the fire on Monday to be done at the beginning of the course angered the parents. After a few years of their children “cancer” that they do not want to receive news that the parents, despite the opening of schools prefer to keep their children at home.

Lubrizol factory officials, city people and factory workers filed a criminal complaint, while a group of deputies said they would ask for a parliamentary investigation.

The people wants an explanation

About 500 people gathered in front of the Metropole building, where governor officials gathered on Monday evening to assess the situation, were loaded on the building entrance doors.

The police took security measures after the people who shouted slogans like “We want the truth” forced the doors. The people of Rouen are preparing for a big show in the evening.

Prime Minister Edouard Philippe, who came to the city on the lack of trust after the six ministers who visited the fire area, said, “All technicians and scientists say ‘no toxic danger.’ I promise to transmit with great transparency, “he said. Edouard Philippe announced that the damages of all farmers affected by the fire will also be paid.

Following the massive chemical explosion in 1976 in Seveso, Italy, the Lubrizol plant is on the Seveso list, which is prepared by the EU, meaning “factories that need to be monitored with high attention”.