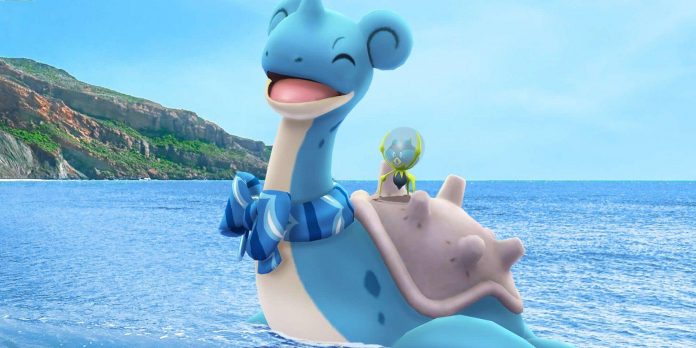 Back in 1998, the first Pokemon games appeared on store shelves in the United States. The game introduced players to 150 original creatures and gave them the task to catch them all, fighting with gym leaders around the world. However, as it turned out, it was possible to get the 151st Pokemon in the game.

In games, Mew is a Pokemon that is very difficult to get legally. Mew can be used in Pokemon Sword and Shield, but only with the help of tools developed for Pokemon: Let’s Go games. Lapras was also quite difficult to find in the original games, and can only be obtained when an NPC gives the player one for helping fight Team Rocket. However, thanks to their charming design and rarity, Mew and Lapras quickly became fans’ favorite Pokemon.

In the past, fans have created works of art dedicated to Mew and Lapras. One fan, for example, made impressive paper figures of Mew and Mutu. Lapras also saw his share of fan art when one of them created a low-poly statue of Pokemon. In a recent post, Reddit user Piinl shared part of his art on the Pokemon page, which depicts a parent Lapras, his child and a curious Mew, the latter meets a child in a cave.

The cover looks almost like a screenshot from a game or one of the animated films. Like its Pokemon counterpart: The First Movie, this version of Mew seems curious and playful, and baby Lapras responds with joy. Mother Lapras seems to be watching approvingly as light falls from the hole in the cave. The picture met with strong approval in the comments.

According to longtime Pokemon developer Shigeki Morimoto, Mew was added to Pokemon at the last second. As a result, the character lacked the same depth of narration as other Pokemon. The creature’s full backstory was eventually revealed in the 1998 film Pokemon: The First Movie, where the character was portrayed as the strongest and rarest of all Pokemon. Similarly, lapras were also rare in the original games, and this species was almost completely exterminated. As for Pokemon Sun and Moon, Lapras is no longer an endangered animal in the franchise.

Starting with the original Pokemon Red and Blue, Lapras can be caught, donated or bought in every major part of the franchise. Mew can also be obtained in many Pokemon games, but the methods of obtaining a legendary creature are a bit strange. In Pokemon Brilliant Diamond and Shining Pearl, Mew can be obtained only if the player has a certain set of saved data from Pokemon: Let’s Go games. However, while Game Freak and Nintendo continue to release Pokemon games, fan art featuring Mew and Lapras is likely to continue to be released for many more years.