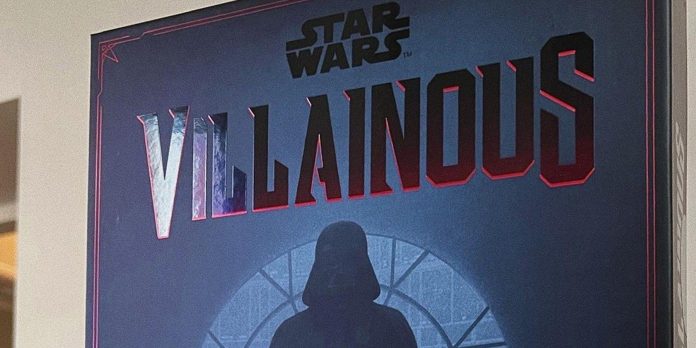 Being one of the most popular franchises on the entire planet over the past 40 years, “Star Wars” has managed to spread to almost every conceivable media. Movies, TV shows, video games, soundtrack CDs, audiobooks, novels and comics based on “Star Wars” can be found anywhere, and board games are no exception. While not all of them were great, Star Wars has undergone many board game adaptations over the years, ranging from original games like Escape From The Death Star to licensed versions of Monopoly and Trivial Pursuit. But one recent release towers above the rest: “Villainous Wars from Star Wars.”

Released just a few months ago, Star Wars Villainous is the latest version of the Villainous board game series. Debuting as Disney Villainous in 2018, in this series, players take on the roles of iconic villains from different franchises and try to outsmart each other in an attempt to achieve their specific goal. Star Wars Villainous obviously takes the series to a galaxy far, far away, giving players the opportunity to play as five iconic Star Wars villains, from Darth Vader to Kylo Ren and Asajj Ventress. Although the initial list is impressive, each of them has its own incredibly detailed, unique goals and abilities of the characters, there is always room for more.

Similar to the Marvel and Disney versions of the game, Star Wars Villainous can get new characters in the form of expansion packs. These new additions will come with their own villain board filled with locations and targets for specific characters, their own set of villain cards and destiny cards that include a number of allies, vehicles and heroes for specific characters, as well as their own character marker, styled to match the rest of the set to look like the corresponding character weapon..

One of the most striking exceptions in the basic set of “Star Wars” villains is Count Dooku. Although he appears on both General Grievous and Asajj Ventress maps, Dooku himself is not in the game. As a goal, Dooku could capture Chancellor Palpatine and take him to the Invisible Hand ship, which matches the goals of other characters, such as Darth Vader, who needs to bring Luke Skywalker and the Emperor to the Throne Room to win the game. .

Another obvious omission in the base game is Darth Maul, one of the most popular villains in the entire franchise. Maul has many goals in the universe from which to draw inspiration, and just a few examples, including ascension to the throne of Mandalore, the creation of the Crimson Dawn criminal organization, or even the creation of his new mechanical body on Dathomir.

While the main series of “Star Wars”, “Clone Wars” and “Mandalorian” received recognition in “Star Wars villains”, the animated show “Star Wars: Rebels” did not. The most obvious “Rebels” character will be the Grand Inquisitor, appearing both in the series and in Obi-Wan Kenobi. A neat goal for the Grand Inquisitor would be to find a certain number of Jedi and defeat them, which could be done by sifting through the deck of Fate, similar to Grievous’ goal of killing Jedi to earn lightsabers.

A more unusual villain that could be included in future Star Wars Villainous additions would be Jabba the Hutt. Having Jabba in the game would be a fun way to attract other iconic characters like Boba Fett and IG-88, as Jabba’s goal may be to assemble a team of bounty hunters and send them after Han Solo.

One of the last great additions to the list of “Star Wars” villains will be Grand Admiral Thrawn. The game will have two images to choose from: either the canonical Thrawn from The Rebels, or a semi-canonical version of Thrawn from novels and legends. In the Rebels version, Thrawn’s goal may be to find all the members of the Phoenix Squadron and defeat them, and in the version after Return of the Jedi, his goal may be to form the Remnants of the Empire.