Home Celebrity Chapter 3 confirms that Wanda is a mutant 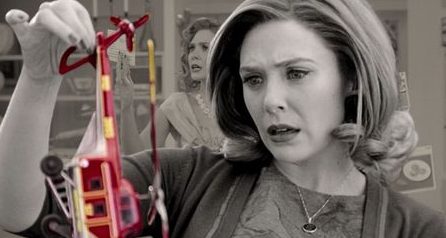 WandaVision Episode 3, “Now In Color”, definitely deepens the mystery and intrigue regarding what is happening in the mock-comedy fantasy world of Wanda Maximoff (Elizabeth Olsen) and Vision (Paul Bettany).

We have been doing an in-depth breakdown of the fake WandaVision commercials, which are used as a “break” in each episode. The first two episodes have hinted that these fake commercials are actually Wanda’s (Elizabeth Olsen) mind wandering away from the fantasy world to recall moments of significant trauma in her life.

On the one hand, the first commercial “Stark Toaster” was a reference to the two days of Wanda and her brother Pietro trapped in the rubble with a Stark mortar shell, on the other hand, the second commercial seemed to be a reference to Wanda and Pietro going through the deadly experiments of Baron Strucker and Mind Stone. So what is this third commercial about?

The strange ad for “HYDRA Soak Bath Bar” sees the woman from the commercials reformulated as an overwhelmed mother in a 70s home. Which in turn transports her to a Greek goddess-style realm, with the motto “find the goddess within.” But that “goddess within” may be a reference to the X-Men ties of the Scarlet Witch, as a Marvel mutant.

Here’s the theory: HYDRA Soak’s announcement is a reference to any traumatic process that caused Wanda to retreat into this fantasy world with Vision. Given the HYDRA reference, there are two very real possibilities:

The first would be that WandaVision is reconfiguring Avengers: Age Of Ultron in the sense that we will learn that HYDRA, Strucker and Mind Stone did not give Wanda and Pietro Maximoff their powers, it simply unlocked the part of their minds where that (mutant) power already existed.

Although on the other hand it is likely that today’s HYDRA has somehow captured Wanda or made contact with her (and Vision’s body?) And is actively involved in experimenting once again with her (or them). , in a way that has unlocked greater (mutant) powers within Wanda (Elizabeth Olsen), which are immediately spiraling out of control.

Either way, the reference being made in this HYDRA Soak ad seems clear: Wanda Maximoff / Scarlet Witch is something much more powerful than anyone originally thought, and she is beginning to embrace that power. But if the word “mutant” will soon be applied to her, could the event that shook the reality of WandaVision be the call that draws the X-Men to the Marvel Universe?

Kristen Stewart Could Have Been Married To Robert Pattinson