Home Entertainment Chapel Hart of America’s Got Talent explains her message to fans and... 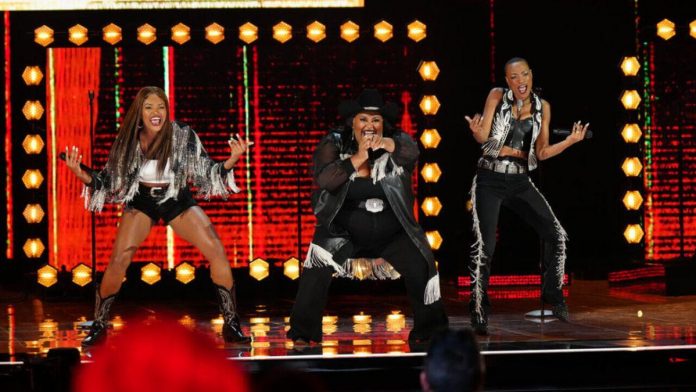 Spoilers ahead for the second week of America’s Got Talent Season 17 qualifiers.

America’s Got Talent may have brought out some of the biggest talents of Season 17 in the first round of qualifiers last week with the likes of golden buzzer winner Avery Dixon and country artist Drake Milligan, but the competition was even stiffer in the second week. Not one but two golden buzzer-winning musical acts took the stage among comedians, aerialists, singers, and more for a total of eleven. Only two of the eleven will advance to the finals to go up against Dixon and Milligan, and country singing group Chapel Hart had a message after they closed out the show on August 16 with another original song.

The country trio – comprised of sisters Danica and Devynn Hart alongside their cousin Trea Swindle – blew the minds of the judges in their audition, to the point that they (and host Terry Crews) came together to give them the sixth golden buzzer of the season, which is a move that had only ever been done once before, when AGT made history for young Victory Brinker. Their qualifiers song had the audience on their feet, and when they spoke with CinemaBlend and other outlets following the end of the episode, Swindle shared the message for voters that they were feeling after stepping off the stage:

I would say to those of you out there – listen, kids. I want you to take your phones, laptops, your iPads, go to your neighbors’ house, knock on their doors, and say ‘Wake up, it’s time to vote for Chapel Hart!’ Just walk in. That’s what you do. Because we need a little more of this. A wise man said ‘Give the people what they want,’ and if they want more Chapel Hart, they gotta vote!

The Hart sisters were in full agreement with their cousin, and the trio (along with viewers) will have to wait until the results show on August 17 at 8 p.m. ET on NBC to find out if enough voters turned out to advance them to the finals. They seem like a pretty sure thing at this point – and golden buzzer winners have a history of making it to the finale and even winning the whole season – but few things are ever guaranteed when it comes to AGT.

Chapel Hart made a bold decision for the qualifiers when they went for a second original song. Even though their first song on AGT – called “You Can Have Him Jolene” as a response to Dolly Parton’s iconic “Jolene” – was enough of a hit to propel them to #1 on iTunes’ country chart, covers (like what fellow golden buzzer winner Madison Taylor Baez did earlier in the night with her take on Steve Winwood’s “Higher Love”) tend to be a safer route when it comes to the live shows.

Instead, the three women performed “The Girls Are Back in Town,” and the crowd response proved that it wasn’t a bad choice at all. Speaking with press, Devynn Hart addressed the idea that doing a second original was a risky move:

I definitely think any time you do your original music, whether it’s the first round [or] the last round, it is always a risk. Because when people aren’t used to hearing something that’s mainstream or on the radio, I feel like they’re a lot less accepting of it. But the response that we’ve gotten about our original music has just been insane. We’re those people that like to give our fans what they want. And so they were like, ‘We want to see y’all do more originals.’ So we’re like, ‘You got it!’

While “You Can Have Him Jolene” was definitely unique and original, there was also some familiarity for anybody who ever heard Dolly Parton’s classic. “The Girls Are Back in Town” is bigger and bolder without losing the charm and energy that motivated the judges to give them the bonus golden buzzer, and the song seems bound to shoot Chapel Hart right back up to #1 on iTunes. Danica Hart commented on how this tune was different than the take on “Jolene,” saying:

This week was hard because we did a sassier song too. I feel like America fell in love with us, like, ‘Aw, they’re sweethearts!’ and this week we’re like, ‘Burn this honky tonk into the ground!’ So this one was different and we felt like our fans got to see another side of us tonight.

Will the fans who loved them after “You Can Have Him Jolene” fall in love with “The Girls Are Back in Town” enough to vote Chapel Hart ahead to the AGT finale? Well, the show makes the voting process pretty easy, with the official America’s Got Talent app and the NBC.com voting page, starting with the broadcast of Tuesday’s episode until voting closes on Wednesday, August 17 at 7 a.m. ET. Just take a look at their qualifiers performance that they hoped would be enough to get them one step closer to the $1 million and Las Vegas stage show:

Be sure to tune in to NBC on August 17 at 8 p.m. ET to see whether or not Chapel Hart advances to the AGT finale. Only two of the eleven acts from the night will advance, and there’s no guarantee that those who came into the qualifiers with a golden buzzer will advance to the finale. The judges all raved about aerialists Duo Rings in particular, and Fusion Japan was a hit with all four of them as well. Freckled Zelda and Mr. Pants were more divisive, but The Brown Brothers brought their musical comedy talents in an even bigger way than their audition. (You can rewatch streaming with a Peacock subscription.) It’s still anybody’s game.

Borat 2: check out the surprise trailer for the extended version...

Sasuke: Know All About The Rinnegan From The Naruto Character