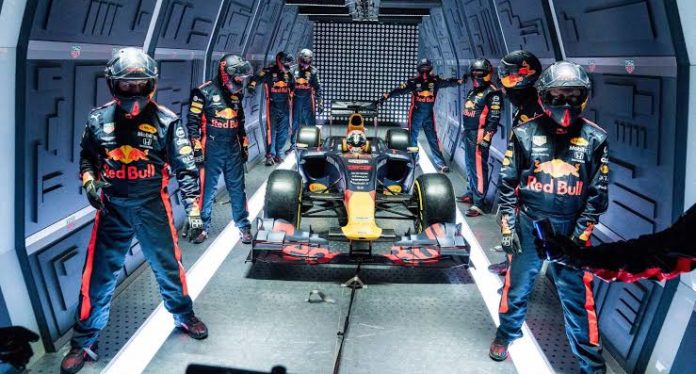 The Red Bull Formula 1 team changed the wheels of a race car on an airplane used to train cosmonauts in Russia. The process required some changes.

Changing the tires at a pit stop in Formula 1 races, refueling the vehicle takes just a few seconds. The whole course of course is taking place on the runways around the world. In a gravity-free environment, things become more complicated.

Red Bull Racing, which managed to draw attention even though it could not win the brands and pilots championships in races this year, accelerated the record that they broke by changing the wheels in only 1.88 seconds in Germany stage in July, with 1.82 seconds in Brazil.

Every second counts in races, so pit times are very important for teams. The performances of the teams have to be as synchronized and fluent as the best dance teams. Russia’s Ilyushin II-76 MDK cosmonaut training plane is among the places where this harmony is observed.

Speaking about this interesting event, Mark Willis, a Red Bull Racing support team, said they thought the process would work the same way, and they couldn’t imagine how difficult it was. While the team was experimenting with a race car from 2005, they had to work hard to avoid damaging the car during the pit.

In fact, this idea had been on the team’s mind for three years. However, due to reasons such as scheduling, permits and logistics solutions, the process was extended. After the break, the team was ready to do what they knew best in the most unfamiliar environment.

In general, people sent to space, before the journey of the car draws in the cabin of this car after the weight remains for 20 seconds. The Red Bull team first spent time getting used to the environment and understanding the basics. Then the team began to think about how to do their jobs in this strange environment, encountered various changes. The first was that there was no need to lift the vehicle and that the vehicle did not have to stand in a fixed place. Changing the tires, team members, the vehicle leaning on the vehicle “to fly away” had to prevent.

There was also a team of employees who were completely upside down. Generally, a team member can lean on top of the vehicle and keep it steady. On the plane, this officer had to do the same job by standing upside down on the ceiling.

The work of the team was not easy, and they could not even approach the record-breaking times. Nevertheless, the team managed to complete the process in under 20 seconds. Willis says, “For some reason, everything is slow. You cannot work at the same speed when you are outside the environment in which your body evolved. ” Willis also added that traditional pit stops are now boring.