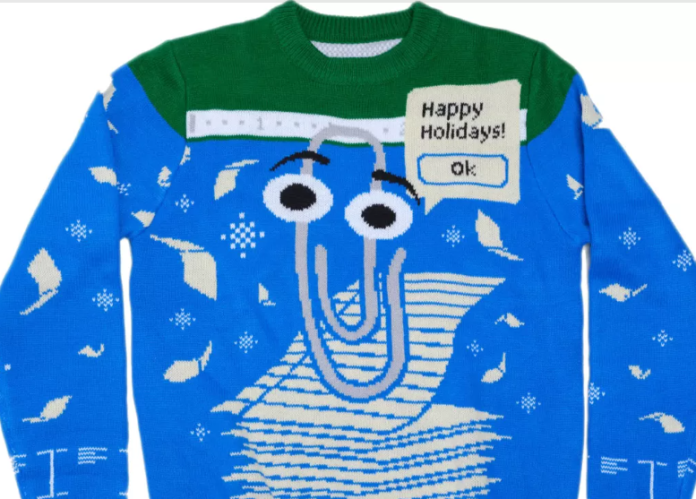 In short: the holidays are coming up, and Microsoft is cheering up with the release of its latest ugly sweater. This year, the costume features Clippy, a successful office assistant who annoyed many back in the 90s.

Microsoft’s campaign to create ugly sweaters started five years ago as a joke. In 2017, the company posted three ready-made holiday sweaters on social networks and asked users which one they preferred. After all, it was their best post that year, and a year later Redmond encouraged him to move from concept to reality.

Microsoft’s first ugly sweater was a variant of Windows 95. Initially, only 100 examples were made, which were sent to members of the press, influencers and Windows fans via social networks. In 2019, an ugly sweater with Windows XP followed, which proved to be just as popular, so in 2020 Microsoft began selling them to the general public along with a new sweater with MS paint. In 2021, Microsoft released a sweater on the theme of the minesweeper.

Yes, it's really real. The Clippy #WindowsUglySweater is here.

Get yours now and help support @College_Success as they assist underserved, low-income students achieve their dream of a college education. https://t.co/cC4kRfCDOM pic.twitter.com/MuSH37cSfH

“Our fans really crave and love Windows nostalgia,” said Megan Muleman, senior social media manager at Microsoft. “It’s always popular on our channels because we are one of the few tech brands that are already 30-plus years old, so people have grown up with us.”

If you don’t like ugly sweaters, don’t worry, as Microsoft has a variety of other themed items in the Xbox Gear Shop, including clothing, home and office supplies, collectibles and accessories. Over the summer, the tech giant partnered with designer Gavin Mathieu to develop a nine-piece clothing and merchandise line based on the Normcore style.

The new ugly Clippy sweater is available in sizes from small to 3XL and is only available in one blue color. The price is set at $74.99, and the proceeds will go to the College Success Fund, which helps make college affordable for low-income students from low-income families. We were informed that Microsoft is also making a donation of $100,000.

If ordered today, it should be delivered well in advance of the upcoming holiday parties. Heck, you might even have time to wear it during Thanksgiving dinner or at a Black Friday party.