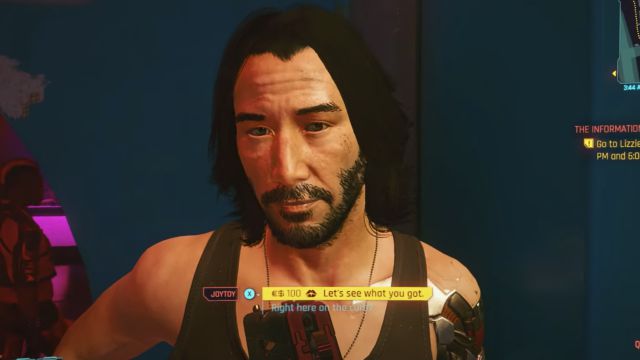 After the publication of a mod that allowed us to sleep with Johnny Silverhand, the character played by the actor, CDPR acts officially.

CD Projekt RED has ordered the removal of the Cyberpunk 2077 mod that made it possible to maintain romantic relationships with Johnny Silverhand, the character played by renowned actor Keanu Reeves. The Polish company, in its intention to avoid this type of options with known personalities —the game itself does not allow it under normal conditions—, has intervened the creator of this mod, Catmino, to eliminate it.

Nexus Mods, the portal that hosts both this and many other mods for Cyberpunk 2077, which has officially opened support for modifications, have limited themselves to saying that they are “clearing things up with CDPR.” From PC Gamer they have been able to take statements directly from CD Projekt RED, who have given their position on the matter.

“Our most important rule of thumb when it comes to user-created content, game mods in particular, is that they are not harmful to others. In the case of changes in the modeling, especially those that involve explicit situations, it can be perceived as if it were really the case by those who lent us their appearance with the purpose of creating characters in Cyberpunk 2077 “, they wield, making it clear that these modifications can awaken discomfort in those who lent their face, but not for these purposes.

Therefore, CDPR wants to detach itself from creations of this type: “When it comes to modeling of real people that we have asked to participate in the game, we ask [the community] to refrain from using them in any situation that may result offensive if you don’t have their explicit permission ”.

Cyberpunk 2077 is updated on PS4 and Xbox One with improvements

Cyberpunk 2077 is available for PS4, Xbox One, Google Stadia, and PC; although its digital edition for the Sony console has been withdrawn from its sale on the PS Store due to the unacceptable state of the game, as recognized by the company itself. There are two big patches on the way to fix it: the first, already available; the second, scheduled for “the next few weeks.” The next gen edition of the PS5 and Xbox Series X | S – free for those who have purchased the game on previous Sony and Microsoft consoles – will launch sometime in the second half of 2021.