Home Entertainment Castlevania: 10 characters and their historical or literary sources of inspiration 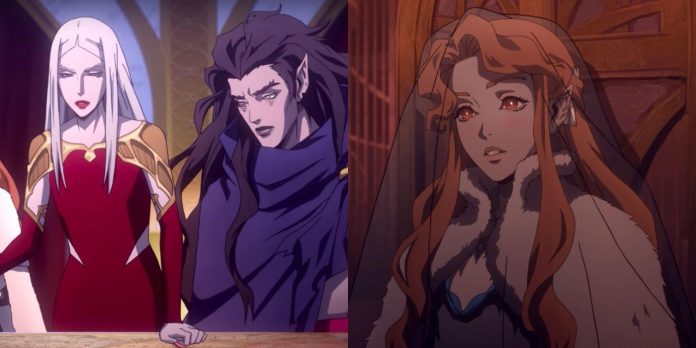 The week of Netflix Geeked brought many exciting events for the streaming platform, including the announcement of Castlevania: Nocturne, the sequel to the famous Castlevania. The announcement of the spin-off inspired fans to revisit the carefully crafted depiction of classic monsters and legendary kingdoms in Castlevania.

With Dracula’s Castle serving as the main setting, the series presents a rich and complex world full of religious conflicts and vampire lore as it follows Trevor Belmont, Sifa Belnades and Alucard, Dracula’s son, as they battle vampires, nocturnal creatures, and other supernatural threats. From heroes to villains, the characters draw inspiration from Gothic literature, ancient mythology, medieval history and more.

Few literary characters have the instant recognition of the name Dracula. Although he is a relatively minor character in Castlevania, Dracula (aka Vlad the Impaler) plays a big role throughout all four seasons. Dracula from Castlevania is an artful combination of a historical character and a vampire count who is at the center of Bram Stoker’s 1897 Gothic novel.

The historical figure, Vlad III Dracula, was the bloodthirsty ruler of Wallachia in the 15th century. His unusually cruel method of punishing enemies earned him the nickname “Vlad the Impaler”, and opponents played down unfounded claims that he drank human blood. The surname “Dracula” roughly translates as “Son of the Dragon,” but when writer Stoker stumbled upon it while looking for a name for his vampire count, he read, according to TIME, that it translates as “Devil.” The rest, it seems, is already history, when Stoker’s villain gained immortality on the pages, on stage and on the screen.

Before Bram Stoker conceived his legendary vampire, Carmilla was written by another Irish writer, Sheridan Le Fanu. The story of 1872 tells about the young Laura, who is visited every night by the beautiful Carmilla. An affair ensues between the young women, but in the end it turns out that Carmilla is Countess Mircalla Karnstein, a centuries-old vampire.

Le Fanu popularized many conventions that later became standard techniques of vampire literature, including turning into an animal, aristocracy, and as a metaphor for sexual desire. As Atlas Obscura notes, Carmilla’s influence on the lesbian vampire tradition is particularly significant. Carmilla is one of Castlevania’s most powerful villains, retaining most of the manipulative qualities and aristocracy of the original character, but at the same time proving an astute political force. As the vampire queen of Styria and the general of Dracula’s army, Carmilla harshly criticizes the leadership of humans, living or undead.

Lenore from Castlevania is a permanent diplomat of the Council of the Sisters of Styria. Her name immediately evokes a reference to Edgar Allan Poe’s famous poem “The Raven”, in which the narrator, tormented by a guest bird, longs for the deceased Lenore. And yet there is another literary Lenore that offers a more compelling connection.

The 18th-century German ballad “Lenore” by Gottfried August Burger tells about the main character, who is waiting in vain for her fiance William from the war. Lenore from Castlevania wears a dark veil, which indicates mourning. In the poem, Lenore is carried away by a mysterious stranger who looks like William. The stranger turned into a skeleton turns out to be Death (a revelation that Castlevania fans will appreciate), who came here to deliver Lenore to William’s grave. Although there is no literal vampire in the poem, Lenore’s text is considered an important milestone in the development of Gothic and vampire literature, and according to Book Riot, it is even quoted in Bram Stoker’s Dracula.

In the fourth season of Castlevania, a new villain appears in the image of Varney, voiced by Malcolm McDowell. The vengeful London vampire takes its name from the plot of the penny dreadful vampire Varney of the Victorian era; or “The Feast of Blood” by James Malcolm Rymer and Thomas Peckett Prest. The series, which was released in 1845-1847, told about the exploits of the vampire Sir Francis Varney, who terrorizes human families throughout Europe.

Although his legacy was later eclipsed by Dracula, Varney’s influence on vampire literature, according to CNN, is significant. Vampire Varney introduced fangs, which became the universal standard image of vampires. In addition, Varney is outraged by his condition, which resembles sympathetic vampires in the films “Buffy the Vampire Slayer”, “Twilight”, “The Vampire Diaries” and others.

Striga of Castlevania, a member of the Council of Sisters and leader of the army of Styria, is the greatest vampire warrior. Her impressive height and the raven armor she wears in battle make her look like something out of a nightmare. Upon closer examination, her name and appearance reveal many mythological inspirations.