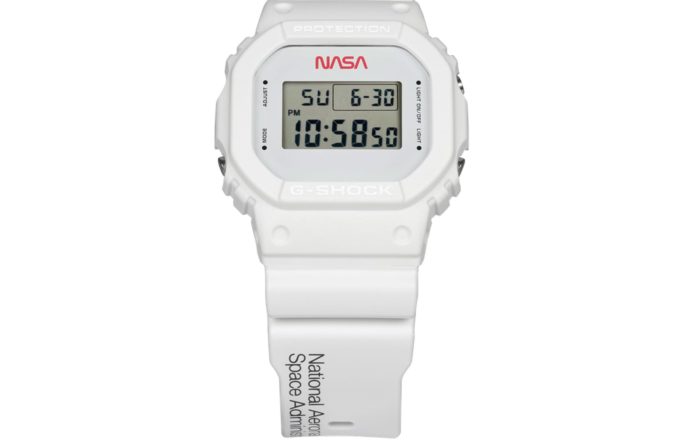 Casio officially introduced and released the new NASA-themed G-Shock watch. Inspired by the astronauts’ clothing and space missions, the watch was produced in limited numbers.

Casio has a special surprise for those who follow NASA space missions excitedly. Japanese watchmaker Casio, as the model name suggests, introduced the NASA-themed and limited edition DW5600NASA20 G-Shock watch.

The digital watch reminds more of the Space Shuttle era, with NASA’s new “worm” logo redesigned for Crew Dragon recently and its almost completely white design. Even the metal-designed case of the watch reminds of spacecraft like the Saturn V rocket.

The Nasa-themed G-Shock watch shows the Moon surface in the background with the EL (Electroluminescence) backlight for those who want to look at the watch in the dark. The same Moon image is also engraved in the metal area at the bottom of the case. Also on the strap is the American flag, which we often see on the arm of NASA astronauts.

Another remarkable point is that the Casio logo does not appear on the front of the digital wristwatch. Apart from the NASA logo on the windshield, the National Aeronautics and Space Administration text on the strap, and the American flag, there is an embossed G-Shock logo only at the bottom of the glass. The Casio logo is only engraved on the metal at the bottom of the watch.

Casio is released with a NASA-themed watch for $ 130. Although the price is accessible, the main problem is that the watch is limited production. The company has already sold the first batch, and new orders will not be shipped until May 6.

The video Casio shared specifically for the NASA-themed G-Shock watch: