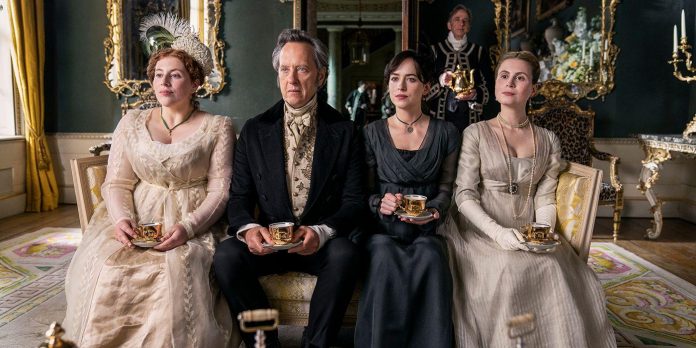 Persuasion, based on the classic novel by Jane Austen, has been the talk of the town since it debuted on Netflix last weekend. Regardless of whether audiences are fans of the changes or impressed by the attempt at experimentation, it’s clear that the latest Austen adaptation has set itself apart from its predecessors. Directed by Carrie Cracknell (a leading theater director in England) and written by Ron Bass (My Best Friend’s Wedding) and Alice Victoria Winslow, Persuasion mixes modern sensibilities with one of the more well-known Regency romances.

Unlike the more infamous Austen heroines such as Elizabeth Bennet in Pride and Prejudice or Emma Woodhouse in Emma, Persuasion’s Anne Elliot is more withdrawn as she nurses her nearly decade-old broken heart. But the Netflix adaptation takes a page out of 1999’s Mansfield Park (which starred Frances O’Connor and Johnny Lee Miller) and broke its protagonist out of her shell to address the audience directly and make her thoughts more easily understood. Dakota Johnson (Cha Cha Real Smooth) in the lead role also immediately adds a sense of modernity, as do her quick-witted monologues.

Screen Rant spoke to Cracknell about some of Persuasion’s fascinating changes, her own approach to Austen, and why Henry Golding (Crazy Rich Asians) makes such a fun scoundrel.

Screen Rant: I’m a huge Jane Austen fan, and I was intrigued by the idea of having Anne act as the narrator, which was almost like having Austen herself in the film. Was that choice already made when you came in, and how did you want to bring that element to life?

Carrie Cracknell: Ron and Alice’s intention immediately was to have this breaking of the fourth wall; to have Anne as a character be both inside her story, but also someone who was able to comment on it. I think you’re really accurate in your description of her as capturing Jane Austen’s voice as well within the film, and that felt really interesting to have the clarity and satirical eye of both Anne and Jane to some extent in the film. That was always the intention.

When I read the screenplay, which was really well developed when I came on board, I felt super intrigued by this balancing of both tonal heartbreak and melancholy of the original novel, but with a much more accessible, more front-foot version of Anne. There’s a formality in the novel, of course, which we love – and in a way the formal encapsulating of the soul is one of the things that’s really interesting in the book. But it doesn’t necessarily make it a really accessible piece of literature, so it felt interesting to me to be able to draw in a new audience for Persuasion.

How did the more color conscious casting open up the world for you? Does that help add a more modern touch on its own?

Carrie Cracknell: I always wanted to cast the film in a color conscious way. I was interested in making a piece of work that could appeal to a really broad and diverse audience. I think, growing up as a white British woman, I always saw myself represented in these classic texts when I watched adaptations on the BBC. And from conversations with friends of mine, I knew that they loved watching Jane Austen adaptations but never saw themselves in those stories, because those stories were not about their culture.

It just feels really interesting to be able to open up these iconic pieces of literature and allow a really broad audience to see themselves inside these fantasies. They’re very pure, in a way quite apolitical, human dramas that touch on romance and comedy and the truthfulness of human experience. To be able to open up who feels part of that story felt really important to me.

I imagine that when any person thinks of Persuasion, the first things that pop into their minds are Lyme and, “I am half agony, half hope.” How much did you think about how you’re going to approach those moments onscreen? Did you think of them as iconic set pieces?

Carrie Cracknell: Of course. What’s beautiful about making a film like Persuasion is that you have this performance history that goes before the film, so you can watch the previous adaptations. And I think the whole team felt incredibly awed the first time we went to the Cobb [in Lyme], and we walked along the cabin. It’s such a beautiful and kind of extraordinary landmark, and you’re thinking about the other film adaptations that have been shot just there.

Similarly, the line “half agony, half hope” is such an iconic and beautiful piece of writing. They’re very wonderful moments to make contact with.

How did you collaborate with Dakota to bring Anne to life, and to find that balance between the formality of the repressed emotions in the novel and the more “open book” approach to her on screen?

Carrie Cracknell: I think Dakota has a really instinctive intelligence, a watchfulness, and a really deep playfulness. It was brilliant bringing her Anne to life, and what you get with all of the best actors is that they bring an enormous amount of themselves to the character. They make really strong, really deft decisions, so you try and hold those. Then you help them to sharpen and clarify the work. We had a really deep collaboration.

It was an incredibly demanding shoot, and the work on the accent is really big and really challenging. I think she rose to it beautifully, and I think her accent’s impeccable. It was a really deep and robust working relationship, and we had a lot of fun together. Overall, we both felt that we made something that we can be really proud of. I think she’s fantastic in the film.

The dynamic between Mary Elliot and the Musgroves is always so much fun, especially how much they contrast each other. Can you talk about bringing that dynamic to life, and having Mia McKenna-Bruce play off them?

Carrie Cracknell: Mia, who plays Mary, was 21 when we were shooting. She had this incredible animal energy and humor, and she just completely understood who Mary was from the very first moment that she read it.

It was quite interesting with the sisters, because they all have these quite different temperaments and atmospheres. She just really went for it, and she built very immediately this quite robust, pretty horrific at times, but very funny Mary. And then what you get is this amazing moment where all these characters meet each other, and they have to just make sense of each other and be live and listen in the moment. We had a lot of fun shooting the Musgrove scenes.

Henry Golding as Mr. Elliot certainly complicates the love triangle aspect of the story. He has me wondering if maybe Anne should give him a chance. How did you want to approach the romcom aspect of Persuasion?

Carrie Cracknell: I love Henry Golding as Elliot, because I think he brings this mystery and real possibility there. And I think it feels exciting within the film context to see him as a possibility, or another road that could be traveled.

I think what you realize, of course, is that underneath that it’s paper thin. There isn’t really enough of a soul connection between him and Anne. If anything, that kind of intensifies the understanding of how deep her connection is with Wentworth.

You’ve directed everything from Euripides to Ibsen, which is so incredible to me. How different is it for you to go from staging theater to directing film? How does your experience influence your approach?

Carrie Cracknell: Directing for screen is such a different challenge, and so much of it is about capturing the aliveness in a moment and trying to cook something that’s instantaneous and bubbling and full of inner life just then. And then you pass on, and you’re in the next moment.

And obviously the whole of theater is, from my perspective, about building this very deep structure for an actor so that they can play an entire role over two hours – but also then to sustain that over many months. Working with actors is using the same muscles, but it’s like a sprint to a marathon. I really enjoyed being in the sprint. I really love the intimacy, the suddenness, and the time pressure. I just found it all really thrilling, actually.

Where did the bunny come from? Was that in the script from the start, or did you add that in later? What is the bunny to Anne?

Carrie Cracknell: The bunny was in the script. I love this idea that, because of Anne’s gender and class and her entrapment as a woman, she can’t become an adult or really begin to live her life fully until she gets married. That’s the kind of horror of Jane Austen and this period.

She’s so able and bright and together and mature, but she’s not allowed to become a full woman. She’s always sleeping in other people’s spare room, she’s always with her sisters or her father. She’s always on the move with her little bag and not settled.

So, the rabbit became this interesting idea that she’s not quite allowed to become a grown up, even though she’s such a mature and thoughtful person. To some extent, it’s the creature that she feels she can talk to you when she has very few people in her life she can connect with.

Are there any other Jane Austen heroines that you would love to work on an adaptation of, or any classical heroines in general?

Carrie Cracknell: I’m a big classical heroine fan. I love working on classic texts with women at the center, but I am going to make some contemporary films. I’ve done this now, and it was completely gorgeous. Now, I’m working on two new films and a new TV series that are all contemporary.

Living with her snobby family on the brink of bankruptcy, Anne Elliot is an unconforming woman with modern sensibilities. When Frederick Wentworth—the dashing one she let get away—crashes back into her life, Anne must choose between putting the past behind her or listening to her heart when it comes to second chances. Adapted from the Jane Austen novel.

Check out our previous interview with Persuasion star Dakota Johnson for Bad Times At El Royale, and with Henry Golding for Snake Eyes.