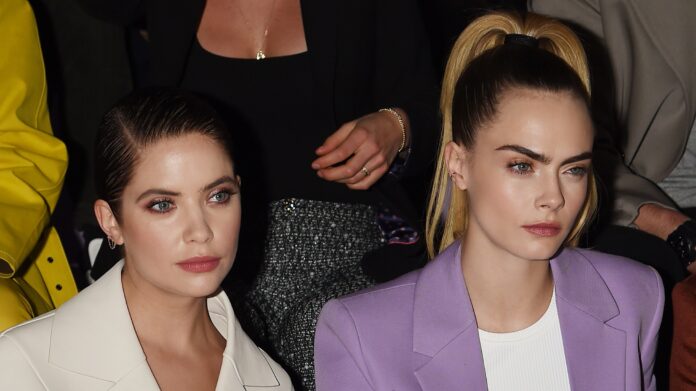 Cara and Ashley would have decided to separate after having been together for two years and going public with their relationship in 2019.

Cara Delevingne and Ashley Benson finished ? The relationship between the model and the actress has always given a lot to talk about. It was in 2018 when rumors began to appear that they were both dating after meeting during the filming of the movie Her Smell , love was born between them and they began a beautiful relationship .

Cara Delevingne and Ashley Benson are splitting up after almost two years together.⁣ ⁣ According to People, it wasn't long after that the couple officially decided to go their own ways and they broke up in April 2020."Cara and Ashley always had their ups and down before but it's over now," a source told People. "Their relationship just ran its course."⁣ ⁣ They were still pretty private about their relationship even as they spoke about it more. In an interview with Elle UK, Cara opened up about the reason why they kept their relationship under wraps.⁣ ⁣ "[I won't talk about it] because it’s sacred. I get why people care so much, and I don’t want to be so secretive that people think I’m ashamed of anything. But I’ve never been in a relationship where things are so public, or where I posted pictures of someone else," she said. "This seemed different. We had gotten to the point where we had kept it a secret, or at least not wanted attention, and now I feel like I’m not going to not be proud."⁣ ⁣ The couple still haven't publicly confirmed they're broken up.⁣ ⁣ People also reports that Cara has been "has been spending time with friends including Margaret Qualley and her sister Rainey Qualley, as well as Kaia Gerber, while self-quarantining amid the novel coronavirus (COVID-19)."⁣ ⁣ Ashely Benson, according to her Instagram story, seems to be living alone for the time being. But she's been keeping busy with calls with friends and taking some selfies.⁣ 2020 is officially the worst year now. ⁣ Source: People Magazine⁣ .⁣ .⁣ .⁣ .⁣ .⁣ .⁣ .⁣ .⁣ .⁣ .⁣ .⁣ #caradelevingne #cara #love #carnivalrow #ashleybenson #selenagomez #model #cashley #orlandobloom #kendalljenner #delevingner #kyliejenner #delevingners #margotrobbie #gigihadid #bellahadid #arianagrande #taylorswift #actress #prettylittleliars #lucyhale #charliesangels⁣

However, love is sometimes not what we expect and everything seems to indicate that Cara Delevingne and Ashley Benson could have made the decision to end their relationship a few months after several rumors emerged that the models were engaged . We tell you everything we know.

According to reports from E! , Cara Delevingne and Ashley Benson ended their relationship after two years of being together. Cara would be enjoying some time alone in this quarantine while surrounded by her friends and people she appreciates, but away from Ashley .

Cara and Ashley had kept their courtship as private as they could, until last June 2019 when they decided to make their relationship public . The girls were truly very much in love, and some time after screaming to the world that they loved each other, several rumors emerged stating that the girls would be getting married soon as they could be seen wearing what appeared to be engagement rings on their trip to Saint Tropez .

At the end of the 2019 , everything took a turn 360 ° when they appeared in foreign publications account Twitter of Cara Delevingne where the model allegedly confessed that she was finished with Ashley Benson. However, she later clarified that she had only been the victim of hackers.

Apparently the hacker prank could be real and this time Cara and Ashley would have decided to go their separate ways. So far it is unknown why Cara Delevingne and Ashley Benson broke up and those involved have not said anything about it, however, it has been a long time since the last time the girls posted photos together on their social networks.

Jungkook buys a new house in the Itaewon neighborhood