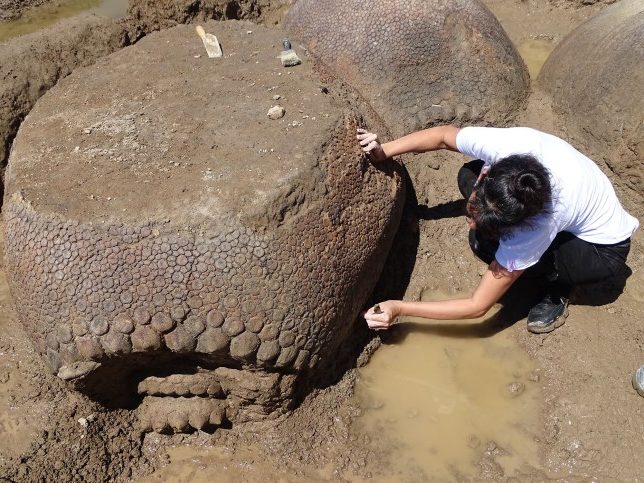 Four huge armadillo fossils were found in Argentina. The largest of the fossils found was the size of a car. Experts think the fossils belong to two adults and two young animals.

Ancient armadillo fossils dating back 20,000 years were found in Argentina . The four fossils found surprised the experts with their size. After finding evidence of fossils in a farmer’s field, the fossils were fully revealed. Researchers think that the area where fossils are found is the resting place of ancient animals.

Researchers think the fossils belong to two adults and two young armadillos. The tests to be done will determine the causes of death, sex and weight of the remains of the animals. It can also be understood how old the animals died after the tests.

Argentine farmer Juan de Dios Sota is the name behind the discovery of armadillo fossils. Taking the cows to graze by the river, the farmer said that he saw strange formations in a dried river bed. Examining the formations more closely , Sota gave information to the authorities after this point.

Researchers say they first encountered four animals in the same area. The fossils found belong to animals called Glyptodonts . Glyptodonts are the ancestors of modern armadillos living in North and South America during the Pleistocene period.

It was understood that the creatures with fossils were covered from their heads to their tails with an armadillo protective armor. The shells of animals were measured to be approximately 1.5 meters long and 5 cm thick.

Among Us! Smash Players and Spectators

Coronary virus transmitted for the first time in the USA