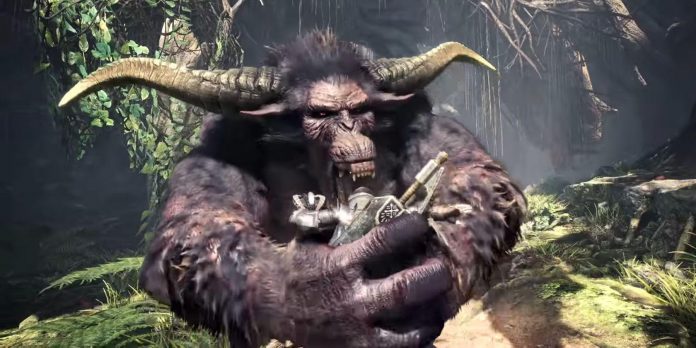 Capcom’s Monster Hunter franchise is an outlet for creative creature designs and bosses ranging from terrifying to downright cute. Unsurprisingly, these creatures are also good at turning into a commodity that fans can buy. This includes a life-size stuffed Palamute toy from Monster Hunter Rise and chibized versions of terrifying monsters like Goss Harag from the same game. One of the really weird, as well as pretty funny items that fans will soon be able to get their hands on is the pillow of one of his iconic boss monsters, Rajang.

Rajang was first introduced in Monster Hunter 2 as a fanged beast similar to a gorilla. Rajang returned to Monster Hunter World: Iceborne along with the volcanic location as a free DLC update. His appearance in Monster Hunter Rise is basically the same, including how he mostly relies on physical attacks and starts using electricity when players lower his health to a certain level. Fans of the series can now own a large primate-like beast as a pillow, which Capcom is officially selling.

This Rajang’s terrifying beast pillow is nowhere near as big as the monster in the game, but its smaller stature is funny. Moreover, he lies as if asleep, with a serene expression on his face. According to the official Capcom store, this pillow is 15 cm thick, measures 90 by 70 cm and will cost the fan at least 26,400 yen, which is approximately $ 200.

Fans were delighted with the look of the pillow, especially from the official images presented in the Capcom store. This includes one where Rajang is relaxing on the couch and another sees the beast lying on the floor with another person. There’s even another photo that shows a man brooding while Rajang sits next to him, with some jokes about how the pillow can wake up at any time and become the threat it is in Monster Hunter Rise.

A similar Khezu pillow from Monster Hunter Rise is also up for sale, where fans can put their head or body on its gaping mouth. This pillow is also available for pre-order for 33,000 yen or approximately $250, which is slightly more expensive than the Rajang pillow. All of these items are currently available for pre-order and are due to ship on February 9, 2023.

Idris Elba has joined the new Netflix spy thriller from the...

Kevin Smith on the cancellation of the movie “Batgirl”: “This is...